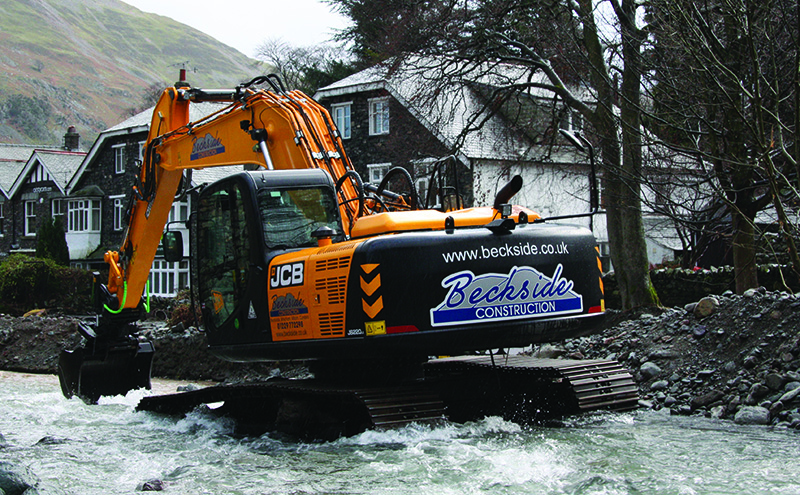 A fleet of JCB machines were drafted in to help prevent “catastrophic flooding” caused by Storm Desmond recently.
Cumbrian-based hydro-electric construction specialist Beckside Construction was working on a hydro project for the National Trust at Hartsop when they heard about the devastation at nearby local village Glenridding, where the storm had caused landslides and a movement of gravel and stone down the Glenridding Beck, which runs through the centre of the village to the Ullswater Lake.
Beckside managing director Robert Morris-Eyton and his son Patrick drove into Glenridding to find the gravel had filled the river course, forcing the torrents of water onto the main road nearby.
Mr Morris-Eyton said, “There was firewood, boats, you name it, it was on the road.” The company moved some of their machines from the hydro project, including a JCB JS130 and new JS220 tracked excavators, along with a 531-70 Loadall. The machines were used to clear stone from the river. Beckside’s JS220 is the first machine of its type in the UK to be equipped with a Steelwrist tiltrotator and operator Robert Butler put the machine to good use during the extreme operation.
Further rain later in the week sent a second load of stone into the Beck and the machines were called back onto the job. Local rental firm Stevens Equipment Rental pitched in with three 30 tonne articulated dump trucks.
Mr Morris-Eyton was hard at work beneath the village’s main road bridge, using the Loadall to clear up to 1.5m depth of stone including huge cobbles, to remove what was in effect a dam. By that time other companies were also sending machinery to help, as additional excavators and ADTs joined the fleet.
“In total we moved about 7,000 tonnes of stone,” said Mr Morris-Eyton.”We had offers of kit from all over the country.”
He has particular praise for the JCB equipment, which ran “faultlessly” throughout, even with the beck water running above the tracks at times. The Steelwrist tiltrotator, which along with the JCB machinery was supplied by local dealer Scot JCB, also proved its worth on the job. “All credit to Rob, our driver, he’s done a really good job with it,” said Mr Morris-Eyton.