Doosan has launched the new DX-235LC-5 crawler excavator, the latest in the company’s new ‘LC-5’ generation of excavators.
Cédric Prins, Product Manager Heavy Excavators at Doosan Infracore Construction Equipment, describes the new features of the machine, which is said to boost fuel efficiency, uptime and return on investment. 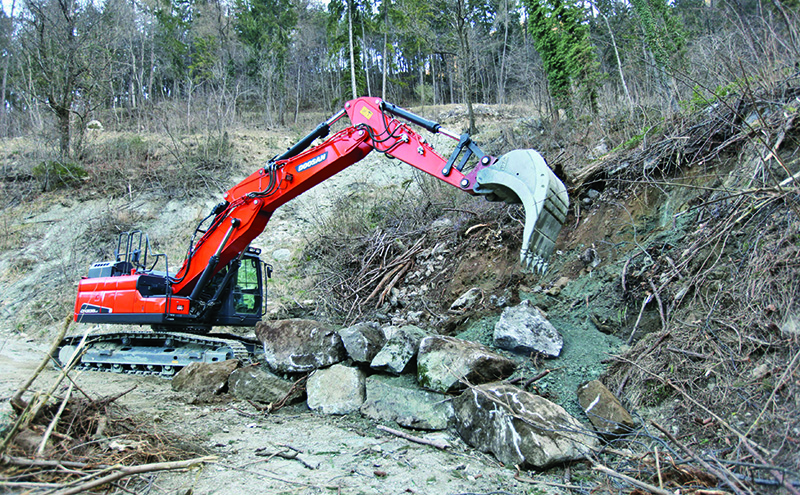 The DX235LC-5 is a standard configuration machine (2.99 m) that complements the narrow width DX235NLC-5 and reduced radius DX235LCR-5 models first shown at the Intermat exhibition in 2015.
It meets the needs of customers looking for a machine with higher performance and stability than the existing Doosan DX225LC-3 22 tonne model and which also compares favourably with the power and productivity offered by the bigger DX255LC-5 model.
The DX235LC-5 combines a 2.99 m width undercarriage, a 900 kg increase in weight and a much heavier counterweight (5000 kg vs 4300 kg on the DX225LC-3) with strengthening in the arm and boom (including the cylinders).
As a result, the DX235LC-5 offers much higher bucket and arm forces. The arm force is on average 7 to 8% higher than that of the DX225LC-3 and the difference between the two machines is even more stark where the bucket force is concerned, where it is 15 to 16% higher in the new DX235LC-5 model. 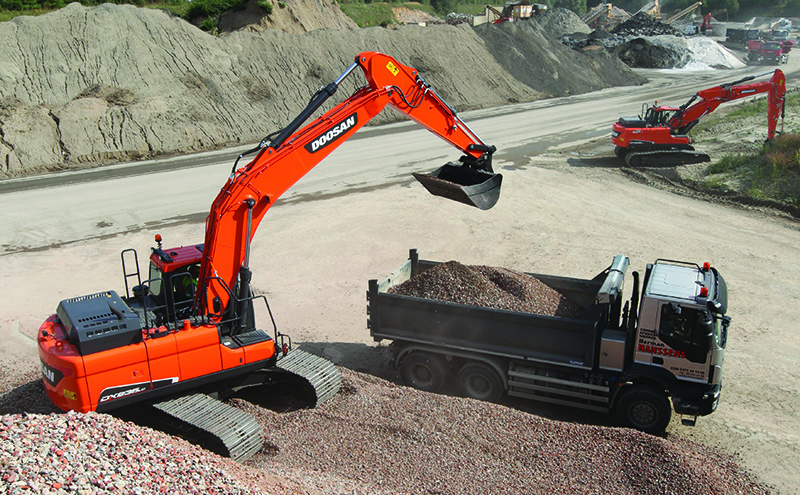 The DX235LC-5 also delivers higher lifting forces – +6% more lifting capacity over the front (7.71 t) and +8% more lifting capacity over the side (4.92 t).
Featuring the distinctive new machine styling scheme common to all new Doosan LC-5 generation excavators, the DX235LC-5 is powered by the well-proven 6-cylinder, turbocharged Doosan DL06P water-cooled diesel engine.
The DL06P engine offers convenience and lower costs by meeting Stage IV emission regulations without the need for a diesel particulate filter (DPF), through the use of cooled exhaust gas recirculation (EGR) and selective catalyst reduction (SCR) after-treatment technologies. The DL06P engine provides an output of 124 kW (169 HP) at 1800 RPM.
As well as the DL06P engine, which is one of the most reliable and fuel efficient ever produced by Doosan, new innovative and exclusive features have been introduced providing an overall 9% increase in fuel efficiency.
Among these features is the new ‘Trip Meter Setting’ screen which allows operators to check fuel consumption daily (or over a desired period) directly from the control panel and to save even more fuel, there is a special Doosan-developed system, Smart Power Control (SPC), to optimise the balance between the pumps’ output and the diesel engine.
Already excelling in spaciousness and ergonomics, the new cab in the DX235LC-5 is bigger than that in the DX225LC-3 and has been further refined for outstanding operator comfort and ease of operation.
The cab offers super controllability with a new system that enables attachments to be operated from either the joystick or a two-way pedal.
Users also have the unique jog shuttle switch which remains a feature exclusive to Doosan excavators worldwide.
The joysticks have also been shortened to reduce the effort required to operate them and an additional pedal for straight travel has now been installed on the left of the main travel pedals, a very useful feature when travelling straight over longer distances. The operator console has been moved onto the seat suspension to reduce vibrations. This gives the operator much better control with the joystick in rough operation.
The DX235LC-5 is factory-installed with the new CoreTMS state-of-the-art wireless fleet monitoring system, a feature not previously available as standard on Doosan excavators and now incorporated in all new LC-5 generation machines above 14 tonne.