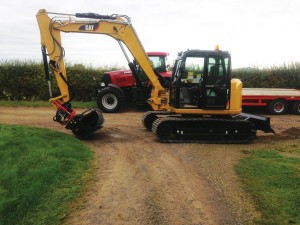 OWEN Gillard, of Owen Gillard Groundworks and Plant Hire, Kelso, recently purchased two new Rototilt tiltrotators – the RT30 and R4. He said, “The R4 is for the 13 tonner, I just really like the model as it uses oil for lubrication inside the casing. I’ve just changed a machine, I had a JCB 3CX and I swapped that to an 8 ton Cat machine and it’s got a Rototilt on it. The 13 tonner, I had that a year before I went to Rototilt, but I was just using a tilting bucket.

Speaking about using the R4 onsite, Owen, who does a lot of work with Scottish Borders Council, said, “I’m on a flood defence job at the moment. It’s quite a tight site for a 13 tonner but with the Rototilt, I’ve done most of the work without having to hire another, smaller machine and we’re getting the work done twice as fast. You’re saving so much time and money. You’re saving the time with not shifting and getting other machines in to do the smaller work.

“When I had my last tiltrotator I wasn’t very pleased with the weight of it. I was getting worried that it was going to be too heavy with the buckets but you’re digging the same amount of stuff with the Rototilt on and it’s not affecting the machine at all. Even with the weight of the Rototilt, you’re not affecting the machine, even with a full bucket at the full reach. So, I’m very pleased with it.”

Tim Wood, from Rototilt UK, said, “The purpose built factory for manufacturing Rototilts was completed in 2009. We have two state-of-the-art production lines, comprising eight fully automated CNC machining centres to enable us to manufacture all of the key components and machining of tiltrotator bodies. This is imperative when you’re building a tiltrotator that has an oil filled casing, where precision and quality control are critical.

“Given the choice, an engineer would always choose oil over grease for lubrication of work tools. Manufacturing to tolerances that allow oil to be used requires a complete focus on quality control and significant investment. All tiltrotators are produced to order, and Rototilt pride ourselves on offering a maximum three-week turnaround of order to despatch.

“The RT30 (for 6 to 12 ton excavators) is well proven, having been introduced 12 years ago. Obviously since then, new technology has led to some improvements, but the basic concept and design is the same. The PropPlus proportional control system is highly dependable, and even though we now offer the new ICS control system on our R series Rototilts, some customers in Scandinavia still prefer the simplicity of PropPlus.

“The R series was introduced 18 months ago. It has a totally new, sophisticated and enlarged design of swivel, attached directly to the coupler underneath. Larger hydraulic channels are machined through the swivel, increasing oil flow capacity (high flow option 200 l/m), reducing back pressure and eliminating internal hoses. These features lead directly to greater fuel efficiency, a lower working temperature and minimised pressure loss as well as reduced risk of leakage. Electrics can also run through the swivel.

“It’s a mindset that has to run throughout the business, from initial designs through to testing of the product before leaving the factory. Investment in production continues, with more CNC centres due in 2016, but Rototilt’s investment doesn’t stop there. New personnel have been added to the systems control team and in design and engineering.

“The ICS proportional control system comes with a screen in the cab, providing diagnostics and fine tuning of the tiltrotator operation. But ICS is also the platform that additional functionality can be added to, including GPS compatability, tilt angle pre setting, return to zero, Securelock and more.”