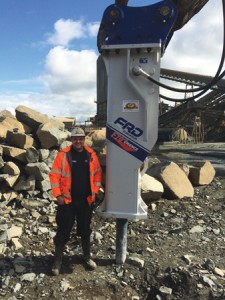 ACCORDING to Andy Black, founder of Relentless Plant Services, breakers now make up about 40% of the flourishing firm’s business.

This is partly due to increased sales of more than 30% in the past 12 months.

From their base in Cumbernauld, Relentless supply Furukawa breakers in a range of sizes from the FX, F, XP and FXJ series.

Andy said, “We’ve just delivered an F70 to Tillicoultry Quarries, which is a monster. It will be used for primary breaking. They bought their first breaker from us in July this year, a new FXJ475.

“We’ve also just sold a load of breakers to Shetland Quality Construction. They’d hired a couple from us and liked them so much they’ve purchased an FXJ275 from the new range. That was a very good deal to get.

“Another firm, in Inverness, who are involved in a lot of hydro schemes also bought one of the new ones, then two weeks later came back for another one.

“As well as selling breakers, we’ve also built up our hire fleet. We’ve got twelve at the moment, all newest models, and every one is currently out on hire. We’ve been flat out. We’re now looking to expand the hire side of things, putting more attachments on the hire fleet like grapples, grabs and shears.

“I think people have got more confidence in us now. Last year was our first full year and whenever you buy a piece of equipment from a new company, you’re not sure if they’re still going to be around the next month to service it.

“But now that people have seen what we’re about, and can see that the business is thriving, they’re willing to put that trust in us.

“It helps that the breakers we’re supplying are real quality. Furukawa used to have a brilliant name, but in my opinion there was a period where no one was really promoting it properly for a long time. When people get Furukawa breakers in, they’re reluctant to give them back in case they don’t get another one.

“Customers never have a bad word to say about them. What we’ve found is generally once we get someone on to a Furukawa, that’s all they want. They’re reliable and they’ve got the fewest moving parts. Their residual value is also great, probably one of the strongest at holding their value.

“The breaker market is very competitive. You’re always up against someone on a deal but we’ve been fortunate. You do lose the odd deal here and there though, usually when someone beats you on price.

“If someone’s looking for a breaker, they’ve got two options. They can either buy a very cheap one, perhaps from a firm which doesn’t even have an agent in the UK. You can get them on eBay or whatever, run it to death and then bin it.

“Or you can invest by spending a bit more on something that’s going to last for two to three years, come in for a full overhaul and then go back out for another two or three years. It just depends on the type of customer. A small landscape gardener who’s knocking out kerbs probably doesn’t need the best quality breaker. He could make do with a cheap maker. People will put their money where it makes sense.”

Aside from breakers, Andy says business generally has been booming this year. He’s recently taken on more staff and expanded his premises as a result of growth. “We’ve been very busy.” he added. “I’ve employed Robert Dawson as sales and service representative. I’m still on the tools a lot and working with the guys so it’s good for customers to have someone who’s not lying under a dump truck and unable to speak to them when they call in!

“Robert can go out and speak to them if they have any queries or are looking to do more business. Customers know there’s someone they can get hold of during the day so that’s helped a lot.We’ve also started a new hose engineer and a new receptionist.

“We’ve taken on the plot next door as we needed more space as we now have a lot more stock. We now have about 4000 square feet, which is double what we had just three months ago.

“Another thing we’ve started supplying in the last couple of months is attachment buckets. Keen Attachments, a made to order bucket supplier based in south Wales, appointed us as an agent in Scotland and we’ve already sold quite a lot. Keen already has a good name and, as far as the Scottish market is concerned, it helps that there’s now someone local they can buy from. Their stuff is great quality.”

Andy recently joined the CMPE committee, partly to help improve things like skills shortages in the industry. He said, “I first joined the CMPE when I was at college. These organisations are a good thing, we all need to help each other and the networking side of things is important.

“Now that I have Robert here, I have a bit more time to devote to things like this. I really want to encourage apprentices. We took on a new apprentice this year who’s learning all the time and doing well.

“The importance of apprentices to our industry is unreal. During the recession, no one was taking them on. In fact, they were paying apprentices off. In a few years time there could be a big shortage of people capable of doing the jobs.

“For us, if we take on an apprentice we can show them how we do things and what we expect. You’ve got four years to turn them into the fitter you want them to be.

“We’re now on our second apprentice. The first apprentice has nearly qualified and he’s brilliant. Customers specifically ask for him. If you get them young and get them into the right mindset of getting up early and going home after a good day’s work, it’s worthwhile.

“We actually thought we weren’t going to find an apprentice this year. Young people who are interested need to ask companies about apprenticeships as early on in the year as they can. People ask us in August or September, by which time the college year has already started.

“They finish school, enjoy their summer holidays and then decide to start looking for an apprenticeship. They need to be doing it around February/March/April so that when they finish school in June, you can get them into the workplace during the summer and see what they’re like. You can bed them in a bit before they get thrown into college, expected to know all the terminology.

“It’s becoming very hard to find staff. We’re trying to get another fitter just now, they’re so very thin on the ground. We keep seeing adverts for fitters and it’s always the same companies. I’m seeing the same advert month after month.”

Looking ahead to next year, Andy already has one eye on ScotPlant – the first ever trade show where Relentless will be exhibiting. “ScotPlant will be good,” he said. “We’ve already started getting wee bit and bobs ready for some of the displays.

“We’re going to have a large range of Furukawa breakers, VTN demolition attachments and the new OilQuick system. We’ve attended other shows as visitors but this will be out first time exhibiting. We’ve picked up tips – the main one being not to sit down. These shows are not only good for meeting new customers but also for having a cup of tea and a bit of crack with existing customers you don’t see as much as you’d like or only ever speak to on phone.”

Robert Dawson said, “We’ve got a few ideas. We’re going to have a bit of fun with it and engage with people near the stand. We’ll try to draw people in and spread the good word on what we can offer them.”