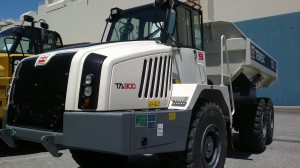 Babcock has opened a branch in Middelburg which will be used as the head office for the Terex Trucks brand in the region. Thirteen trucks have been sold for Babcock’s initial stockholding.

Babcock will also provide parts and other aftermarket support services to customers in South Africa and neighbouring countries. Terex Trucks will support the firm by providing a range of commercial and technical resources, including technician training to support the complete product range.

Paul Douglas, director and general manager of Terex Trucks, said,  “Partnering with Babcock, one of Africa’s most established and experienced equipment suppliers, will significantly boost the sale and support of Terex Trucks’ rigid and articulated haulers. We were impressed with the commitment to customer satisfaction and customer support that Babcock embraces and are convinced that this will be a great partnership which will leverage the strengths of both.

“Our new Volvo-owned, yet independent status, gives us the best of both worlds. We retain our organisation structure in its current form with its entrepreneurial spirit, customer focus and speed of execution, with the added benefit that being part of a global leader in construction and equipment brings with it.

“This deal with Babcock, and the ongoing investment programme that Volvo Construction Equipment has sanctioned in Motherwell, demonstrates how the acquisition is bearing fruit for Terex Trucks.”

Roger O’Callaghan, CEO-Africa, Babcock International, added, “Babcock is very excited to incorporate Terex Trucks into our current portfolio, which complements our existing range.  What is abundantly clear, in the short time we have been dealing with Terex Trucks, is that the rugged and simplistic design of the trucks is perfectly suited for the harsh local conditions in which our customers operate.”