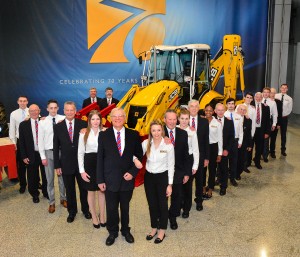 JCB IS marking its 70th anniversary by giving employees around the world an extra day’s holiday – and by launching a limited edition version of its most famous machine.

On October 23rd, 1945, the late Joseph Cyril Bamford CBE founded the company in a tiny garage in Uttoxeter, Staffordshire, making trailers from wartime scrap. Today the company has 22 factories, 11 in the UK and others in India, the USA, Brazil and China employing more than 12,000 people – all of whom were today (October 23) enjoying the additional day off.

The special milestone is also being marked with the production of a limited edition version of the iconic 3CX backhoe loader which fuelled the company’s success. A total of 70 of the special machines will be made in striking livery last seen nearly 40 years ago on the JCB 3CIII model.

Lord Bamford said that JCB and its employees should be very proud of what has been achieved over the past 70 years – but the company’s focus is very much on the future. He said, “Seventy years is a long time, but the past is the past and while we are proud of it, our engineers are really only interested in the future and the products of tomorrow. You cannot rest on your laurels in business; you have to be thinking of tomorrow, the changing world markets and the products our customers need. That is what makes me and all our people tick.”

Lord Bamford, who was born on the same day as his father founded JCB, added, “My first memory of JCB really was my father. He was an engineering genius, there was no doubt about that and he was always dreaming of things, and dreaming of better ways of doing things. The backhoe loader my father invented was a godsend and started a mini revolution in construction machinery. Today the backhoe is one of more than 300 products we produce and sell globally.

“A saying that my father had was that customers’ make payday possible and that is still true today. They are crucial to what we do and we will continue to listen to our customers around the world as we develop new machines. The fact that we are a family business makes us different as virtually none of our competitors are family businesses. We are dedicated to the production of world-class products and take a long-term view.”

Lord Bamford took a close look at one of the first of the limited ‘platinum’ edition backhoes which will go into production in earnest at JCB’s World HQ in Rocester next month. They will come complete with red buckets, full white cab and red wheels instead of the customary black and yellow finish – a livery last seen on the 3CIII model in 1979. And in a nod to the demands of the modern operator, the colourful machines will also be equipped with in-cab coffee makers. The limited edition 3CX backhoes – which have a top speed of 40kph – will be fitted with 109 hp JCB Tier 4 Final Ecomax engines manufactured at JCB’s plant in Derbyshire.

Since JCB’s first was manufactured in 1953, the company has produced more than 600,000 backhoes and now sells them in 120 countries. JCB has also been the world’s biggest manufacturer of backhoes for 15 years in succession with a range that spans 40 models from the compact 1CX through to the mighty 5CX.