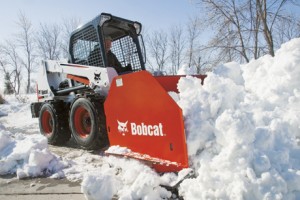 AS the UK braces itself for a predicted harsh winter, Bobcat has expanded its range of products for winter maintenance work.

Additions to the range this year include the S450 skid-steer loader and T450 compact tracked loader. Both models feature the same new generation cab design used on all larger new generation Bobcat compact loaders, providing entry and exit through the largest cab door opening on this size of machine.  Hydraulic performance has also been increased and both machines are equipped as standard with the quick-change Bob-Tach attachment mounting frame.  Customers can also choose the optional Power Bob-Tach system to change non-hydraulic attachments by flipping a switch inside the cab.

These are now part of a choice of tool carriers that can be combined with the Bobcat range of winter weather attachments such as snow blowers, buckets, snow blades and salt and sand spreaders, to provide compact and versatile solutions for dealing with the effect of all types of winter weather.

Bobcat say these cover virtually any winter application, including clearance of snow and ice on urban and country roads; pavements; car parks; superstores and other out-of-town locations; driveways; parks; school playgrounds; sports fields and similar areas. To enhance working on snow, Bobcat also offers optional steel tracks to go over the tyres on the wheeled loaders as well as individual tyre snow chains.

The Bobcat family of snow blowers offers a choice of 18 models, to allow customers to select one that matches exactly the capacity of the carrier and its hydraulic performance.  The hydraulically-driven Bobcat snow blowers can throw snow up to 15 m and have a rotating chute and deflector to point the snow in the direction desired.

Large capacity buckets are available for handling snow. They have high backs to help with pushing snow and straight sides to penetrate snow piles.

The Bobcat snow blade, available in six widths from 1219 to 2438 mm, is designed to quickly remove light or moderate snow from pavements and driveways.  An optional end wing kit converts the 2134 and 2743 mm models into high-production snow pushers.

The Bobcat snow V-blade, which is available in five different widths, can be used in five configurations: as a V-blade, scoop blade, straight blade and 30o left or 30o right angle blade.

The hydraulic salt and sand spreader is, says Bobcat, “ideal” for spreading in confined areas, such as car parks and pedestrian zones, where larger equipment cannot be used.  This attachment has a hopper capacity of 250 litres. The hopper can be used as a bucket to allow the spreader to be filled from a pile.  The spread pattern is controlled by a hydraulic motor and ranges from 5.6 to 8.7 m, depending on the hydraulic flow of the carrier.

Finally, the Bobcat scraper attachment, described by the firm as being highly efficient at dislodging packed snow and ice, provides an environmentally friendly alternative to the use of chemicals or salt. The scraper removes mud, snow, ice and other packed-on materials with ease, leaving behind a smooth surface.