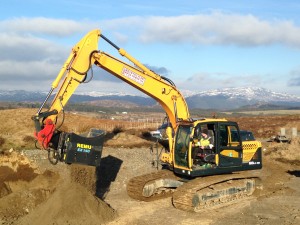 A REMU screening bucket from Worsley Plant has helped Wyvis Plant & Power Ltd to save time, money and the environment in the hydroelectric power industry in the Scottish Highlands.

Wyvis Plant & Power Ltd is a family owned business based in Strathpeffer, Ross-shire. It is run by two brothers, Ian and Alan Stewart.

The company was established in 1968 by their father Kenneth and they specialise in installing hydroelectric power stations for their customers.

Hydro electric power now accounts for around 12% of all Scotland’s electricity, and over half of Scotland’s hydroelectric schemes are in the Highlands and Islands area.

Currently there are around 145 hydro schemes of various sizes operating in Scotland.

Many of the hydroelectric stations Wyvis Plant work on are in hard to reach areas of the Highlands, where accessibility to the site is often poor.  Roads are located high up in the mountains and moving plant and vehicles is difficult.

The potential to take materials off site and bring in new material is a lot harder.

With some projects involving laying pipeline of over 1km in length, there is a lot of material being excavated, followed later by the need to backfill the newly laid pipes.

Wyvis Plant could see the potential benefit of screening material on site. This would mean material could be reused, rather than taken off and bought onto site.

Alan made contact with David Marshall, Worsley Plant’s area sales manager for Scotland, and made the decision to purchase a REMU EX140 for use on their 14t and 18t excavators.

Alan said, “The REMU screening bucket has saved us considerable time, as well as transportation and material costs.

“The nature of our work, with the difficult site access, means that recycling materials not only makes the job more cost effective, but is also kinder to the environment.

“We are extremely pleased with how the REMU bucket works.

“Even with sticky material it performs well when others wouldn’t. Being in the Scottish Highlands material is often damp with a high clay content and the REMU bucket hits the mark.”