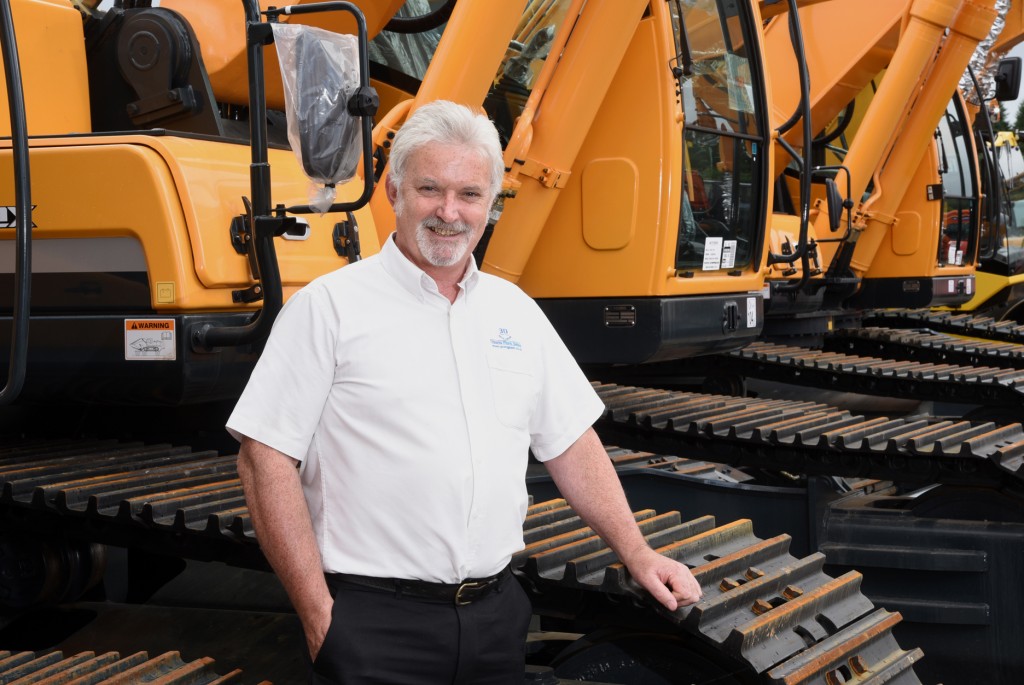 Brian Young has been managing director of Young Plant Sales for over 20 years. Based in the outskirts of Doune, Stirlingshire, the business was initially started by Brian’s father, Tom, in the late 1970s and has gone from strength to strength thanks to a number of world class dealerships including Kubota, Hyundai and Bomag.

Young Plant is now one of the largest compact equipment dealers in the world, selling over 6000 new Kubota mini excavators alone and they supply other top of the range plant and machinery to a wide range of industries from forestry and landscaping to construction and civil engineering.

Brian tells Gary Moug about a lifetime in the plant industry, the vast changes he’s seen and why things could all have been so different if he’d followed his initial chosen career…

A) The business was started in 1978 by my late father, Tom. He left RAF Bomber Command after the war and worked for JCB and JCB dealers for 27 years. My mother, who worked with him from the start, always said he was JCB’s first salesman. When he first got involved in the plant industry, factories sold direct to customers and the pricing was not discounted.

In 1978 they decided to set up on their own and started Young Plant Sales with very limited funds. They rented premises in Glenmavis before the opportunity came to buy a larger yard here in Doune. I joined the firm full time in 1980. I was the youngest in the family and the only one to join the family business. We had only four staff including myself and an engineer.

It wasn’t my first career choice. When I was a small kid I wanted to be a zookeeper and when I was older I wanted to be a vet. My exam results weren’t good enough to be a vet – at the time something like 170,000 people were competing for 170 university places in the UK. It was harder to become a vet than a doctor. I completed a zoology degree instead. David Attenborough had the job I wanted then and 36 years later, he’s still got it!

Q) How has the business grown over the years?

A) In 1979 we became one of two Kubota dealers when we took on their mini diggers. It was a great dealership to get but a hard slog in the early days. People had never seen a mini digger before and I was initially laughed off building sites all over the country.

It was a difficult task in the beginning but we’ve grown steadily since then. Over the years we’ve built up partnerships with leading names including Hyundai, Bomag, Hydrema, CompAir, Probst and Ausa.  Kubota is still our biggest seller by numbers of units and the market leader. We also stock a vast range of accessories. My father passed away in 1992 and I became MD. The business is very different now from the early days.

A) Vital. Early on, a young girl called Olive Kerr came to see us. She was 16 and had just left school. The business had started to grow and we needed someone to help with admin.

We asked when she could start and she said ‘I’m free now’. She started that afternoon. She’s now the company secretary and office manager and runs the place along with sales director Bob Lyttle when I’m not here. She knows our business inside out.

Another stalwart, Helen Lidgate, has been here 23 years, helping in accounts and admin. We have 29 employees and our workshop staff are amongst the most highly trained in the country. My mother, Bridie, ran the accounts until she retired five years ago at the age of 85. I asked her to go then as I didn’t want to set a precedent!

Q) Can you describe a typical week?

A) We try to be proactive but some customers can be quite demanding. We sell a lot to the rental industry and their situation is very reactive. As a result, customers phone us up needing a machine immediately, perhaps because all their existing ones are out on hire or a big job has come in. So priorities change by the minute.

As machines get bigger, production time takes longer. For some forestry and demolition kit, it can take up to 150 hours of workshop time for modifications – but the customer needs the unit yesterday. Whilst we are always absolutely delighted to win the business it can be a daily challenge.

A) Two moments stand out. The first time we had a multiple order for mini excavators is one. GAP Group ordered eleven mini diggers from us in the days before fleet purchasing. One competitor even called me a liar as he refused to believe this had happened!

The second moment that stands out was when we bought North British Tractors (NBT) in 2003. We’d coveted and admired Bomag and Thwaites for a long time and wanted to be their main dealer but they were very loyal to NBT. We decided to approach NBT to see if they’d consider selling. Six months later, they called me to say they’d do the deal. We didn’t automatically inherit the dealerships so we still had to prove our marketing strategy and win their approval before everything was finalised. We had to move everything from NBT’s base in Airdrie to here in Doune over one weekend. Every member of staff worked all weekend to make it happen. We had to dismantle all the shelving and rebuild it, and upload all the stock on our computer system for the Monday morning. There was upheaval for six months and we had to learn their systems.

Q) What one thing would you like to change about the industry?

A) The price wars can be fierce and a challenge. So much of our time is spent concentrating on price when we would prefer to speak about value. Most sales conversations revolve around money – it’s endemic in the whole industry and the pressure works its way down from above.

The client wants the project delivered at an affordable, competitive price. This pressure cascades down through the supply chain ultimately to the equipment suppliers and service companies. There’s always going to be somebody cheaper than you but price alone should not be king. We sell a lot of premium products, which come at a price. Our challenge at Young Plant Sales is to sell value rather than price alone and for customers to see our machines as a long-term investment.

Q) What does the future hold for Young Plant Sales?

A) We started a five-year business plan for growth two years ago. Our aim is for 10-15% growth per year, and in the first two years we’ve achieved that. We want to increase our product range and improve quality where it can be improved. We want our suppliers and customers to value us and trust us to deliver a quality product and service. We aim to exceed expectations, keep customers coming back and recommending us to others. We have set ourselves some very ambitious targets. Recruiting skilled staff is very difficult. We have five apprentices here (plus my own son who is helping in our workshop for the summer months between studies) and bringing in skilled youngsters through apprenticeships we feel is the way forward for our industry.

Q) Any funny anecdotes from your time in the industry?

A) One springs to mind. When Kubota were approaching 10,000 sales, they phoned us and said they were making 100 machines in special colours to mark the occasion. They wanted us to buy ten of them. I said that wasn’t a problem and was told to expect silver. But when the machines arrived, they were actually pink! I suddenly had ten pink diggers to sell to the male dominated Scottish plant market! We took them to exhibitions and visitors were laughing at us again, jokingly asking if they came with a free pink G-string! Jarvie Plant of Grangemouth bought several of them. John Jarvie explained that there could be 20 machines on a site but people always talked about his. Similarly, another customer on Arran (Armitage Groundworks) has since adopted this as his corporate colour and we paint them specially.

As a side note to this, my wife gave birth to our son Joe around this time. While we were in the delivery room the midwife asked what I did for a living. When I told her I sold plant equipment, she said one of her friends had just bought a pink digger. She was taken aback that I could identify the customer Marshall Construction when she told me where she lived.

Q) What advice would you give youngsters considering a career in the plant world?

A) Be prepared to learn every day. This is still a good industry to be involved in but it can be difficult to get a start, as nobody wants half-qualified apprentices working on their site. They all want highly qualified, experienced personnel. People don’t even want an experienced person turning up with a trainee and showing them how to do it, as this could slow them down.

We need quick and diligent learners as the industry doesn’t have patience. Youngsters must be able to learn from mistakes quickly. Despite all this, there is a massive skills shortage – the industry is crying out for new people.

Q) What do you think of the state in the industry at present?

A) It’s steadily growing. I take part in worldwide surveys and the forecast is still for reasonably vigorous growth over the next three/four years. The outlook is rosy. Margins will continue to be tight, however.

Q) How do you relax in your spare time?

A) I love motorbikes and ride a Harley Davidson. I also enjoy spending time with my family and walking my German Pointer dog Callie.

Q) Best and worst thing about your job?

The worst part is losing business, especially if it’s because we’re unable to deliver in time. A lot of products are now rationed with long lead times so there have been times when we’ve had to walk away from deals.

Q) What’s the biggest change you’ve seen in the industry?

A) Over the past 10-15 years it has to be the Internet. The Internet has fed an insatiable thirst for things to happen instantly. A down side of this is some people appear to have little or no patience. If a machine fails to start first thing in the morning the demand is to have it up and running right away – regardless of where the site is.

We always strive to offer the best practice but circumstances determine this and any engineer can only attend one machine at a time.

On the plus side, the Internet brings us into contact with customers on a daily basis through social media and allows us to send and receive technical information very quickly for the benefit of us all.