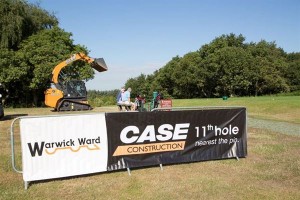 Athletes with restricted growth and the potential to become a Paralympian have been helped by the event, which was attended by 176 competitors who raised cash for the Dwarfs Sports Association UK (DSAuk) charity.

The golf day, held at Doncaster Golf Club, was supported by Case dealers, customers and suppliers, and Case staff and their families. The event has grown over the past nine years and this year featured 44 teams. For the first time, there was also a junior competition to make it even more of a family occasion.

The aim of The DSAuk charity is to help promote sport in the UK for everyone with a restricted growth condition. The charity has helped train many athletes to go on to compete at the highest levels in sport including the Paralympic Games.

The idea to first host an event for the charity was the brainchild of Rick Morris, Case’s UK network development manager, who has a personal connection with the organisation. Since organising the first event in 2007, Rick has helped to raise more than £50,000 for DSAuk.

Rick Morris said, “The day was a great success and I would like to personally thank all those who attended and got involved, including our sponsors and everyone who donated a huge array of gifts which we raffled and auctioned off. The money we raised will make a real difference to the charity and we look forward to welcoming everyone back again next year.”