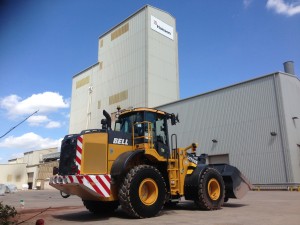 A historic deal has been struck which has resulted in Hanson using Bell ADTs and wheeled loaders for the first time.

Bell Equipment UK has supplied 15 machines to the construction materials firm in a move that was more than two years in the making.

According to Hope, awareness of Bell machines amongst colleagues wasn’t high, with little direct experience of using Bell products and a poor perception. Piper offered to arrange a number of demonstrations to disprove that theory.

While Hanson purchasers went elsewhere on that occasion, there was enough feedback from site managers for Chris Hope to note that Bell was now a potential option for the future.

At the same time, tests conducted by HeidelbergCement in Belgium revealed what Bell describe as “exceptional performance results” for wheeled loaders from John Deere – the firm which makes the Bell range of the machines. As a result, Bell was invited by Hanson to tender for its 2014/15 purchasing period.

Chris Hope explained, “The brighter economic outlook of recent years has made it essential that we have equipment capable of meeting growing demand, and we had a remit to replace a sizeable number of machines nationwide with the focus on key sites and applications.”

Bell secured an order for 15 machines, with deliveries staggered throughout late 2014 and early 2015, with the last completed recently.

Robin Piper from Bell Equipment said, “For Hanson to take the bold step of purchasing so many machines is testament to the quality of Bell ADTs and wheeled loaders. We have worked hard as a company to improve perceptions of performance and reliability and Hanson’s commitment proves that, once a company has the opportunity to see a Bell at work, then they buy Bell.”