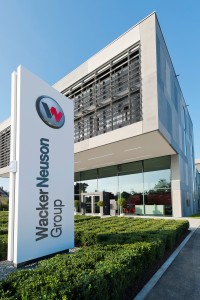 THE Wacker Neuson Group has reported record revenue and earnings for the first half of 2015.

Revenue for the first six months of the year increased by 14% relative to the prior-year period to €706.4 million, a record high for the period.

Profit before interest and tax (EBIT) for the first half rose 4% relative to to reach a new record high of €65.7 million.

Cem Peksaglam, CEO of Wacker Neuson SE said, “Our business grew significantly despite negative market developments in many countries, especially outside of the US and Europe.

“This is due to our strong market position and our continued commitment to implementing our strategy.”

In Europe, revenue rose 11% compared with the previous year. The region accounts for the vast majority of revenue at 72%.

The largest nominal increase came from the Americas region, which reported a 22% rise in revenue. In the Asia-Pacific region, revenue was up 21%.

The compact equipment segment again proved to be the main growth driver in the first half of the year, with revenue for this segment increasing by 25% relative to the previous year.

However, revenue from the light equipment segment only rose 5%, falling short of expectations. The Group said this was mainly attributable to difficult market dynamics in countries such as Canada, Brazil, Chile, China, Australia and Russia.

The Group remains optimistic about the current year.

Cem Peksaglam added, “Our order books are full and we expect the promising conditions in established markets to have a positive impact on our business.”

“Our plans to launch truly new and innovative products to market together with continued stable business in the US, initial signs of improvement in various crisis-hit countries and our stronger services segment should all have a positive impact on Group performance in the second half of 2015,” concluded Peksaglam.