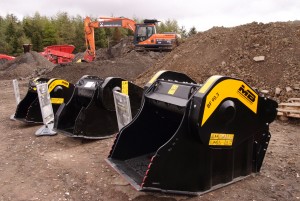 A windswept Livingston industrial estate on a cold Tuesday morning might not be everyone’s idea of a dream destination.

But for Worsley Plant managing director Sean Heron and Scottish sales manager David Marshall, there’s no finer location to showcase their range of hydraulic attachments to the increasingly important market north of the border.

I was on hand to interview the pair on the first of three Demo Days, designed for customers to come along the see the impressive kit in action.

• Lehnhoff hydraulic quick couplers on a range of machines

Sean said, “The kit we do is all a concept. It’s not something like a forklift or a digger where you can see straightaway what it does.

“The purpose of these open days is to let people look at the kit in action. It’s one thing looking at a bucket crusher parked up on a stand at a trade show. But it’s another thing to see it actually working in the field and turning waste materials into products. We did our first Demo Day in 2007 and we’ve been doing them pretty much since then.

“It’s an expensive thing to do but it’s tried and tested and has been worthwhile.

“The challenge is to get people to turn up.

“Having said that, we did one in Liverpool last year and even though there were maybe only 20 people there over two days, we did business with half of them.

“You have more time with customers. You can spend a good hour-and-a-half to two hours with them and they leave with a clear picture.”

Project Plant revealed last year that David Marshall had joined Worsley as Scottish sales manager following an ‘on the job interview’ at ScotPlant, where he helped Sean and the team enjoy a hugely successful show.

Sean added, “It’s been an interesting journey with David. It’s been great.

“The Scottish market is massively important for us, we’ve always had great success up here.

“We see the crushing and screening buckets in particular as being made for this market, especially in the rural areas where the job sites are invariably smaller and the distances between the source of the material, like quarries, are big distances.

“This equipment is perfect for cities too but the volume market for us is rural areas. We want to get a full-time engineer in Scotland, which will let David focus on what he’s best at, which is in front of customers.”

David said, “I’m enjoying my role very much. We’re not the cheapest out there, so that’s one thing you’ve got to combat right away. Our strength is the quality of the products.”

David described the Livingston Demo Days as “his baby”, having come up with the idea of holding such an event in Scotland.

“It’s about getting the message out there,” he added. “We have to sell the concept first.

“These are working demonstrations. Any customer can come in and see the equipment working.

“We’ve got one customer coming in with a 13-tonne machine who’ll be using our buckets.

“Any customer wanting to try something can do so.

“We’ve got customers coming from inverness and as far away as Stornoway.

“I’m trying to expand the market in Scotland.

“The market at the moment is very buoyant, this year’s been very good. It’s all picking up, there seems to be a bit more money out there.”