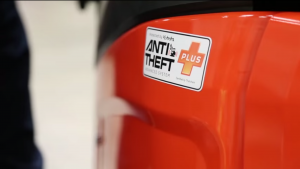 GROWTH in Britain’s construction industry took a significant leap in February this year, rising to a four-month high and adding further weight to current evidence that the UK’s economy continues to blossom as we progress through 2015.

Growth in the sector is good news for machine manufacturers and plant hire companies alike, but with more work flooding into the market, demand for machines is booming. Unfortunately, economic growth comes with some negative implications, and an increased risk of theft remains a major concern for the industry.

Kubota has been the market leader in the mini-excavator market for decades, and alongside continued development of its product range to include new larger tonne vehicles  – KX080-4 – the issue of increased machine security is something that the company has stepped up in order to safeguard its machines from the risk of theft.

All Kubota’s mini excavators now feature its Anti-Theft Plus security system, a technology that is integrated into all new Kubota machines in 1.5 to 8 tonne catagories; an addition which has resulted in Thatcham endorsement – a coveted certification recognised by insurers that can potentially bring about substantial discounts on premiums.

Kubota’s simple and secure anti-theft device is based on a one-key system which has an identification code embedded into an IC chip, which means the engine only starts when the system recognises the associated key.

As standard, the equipment includes one red programming key, plus two black operational keys, and up to four black keys can be programmed to a single machine – no special procedures (such as PIN numbers) are required from the end user. The one-key system also allows access to the cabin door, engine bonnet and the fuel tank.

For many excavators on the market, only one key is required to operate a number of machines, which essentially means the risk of theft is high if a key were to go missing. With Kubota’s Anti-Theft Plus system, only programmed keys will enable the engine to start; identically shaped keys will not start the engine unless they are programmed.

The level of security is boosted further with the addition of an in-built immobiliser, which means if someone attempts to use an un-programmed key it will trigger an alarm to sound.

The essential element of Kubota’s Anti-Theft Plus security system is that without the bespoke key, the fuel, hydraulic and electric systems are fully immobilised and cannot be used, under any circumstance. In addition to this in-built security, Kubota equipment also comes with an added layer of protection in the form of extra guarding fitted around the more sensitive areas of the machine’s operating system.

Two pre-programmed keys are supplied as standard with each new machine, and a third master key gives users the opportunity to easily re-programme the machine with a new unique identity number, via controls on the digital dashboard, if one or both of the original keys are lost or mislaid.

If growth continues to progress as expected this year, security matters will only intensify, so hirers and end users need to ensure that their machines are equipped with robust and practical technologies that can substantially reduce security risks on site.

For more information on Kubota and its range of solutions for the construction industry visit www.kubota.co.uk or call 01844 268000.