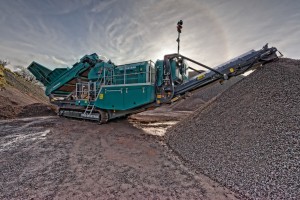 The Premiertrak 600 is described as a high performance primary jaw crushing plant machine. Specificed for quarrying, demolition and mining applications that require high production capabilities, especially in hard rock, the machine was launched at the Nordic Open Event held in Stockholm at the end of May.

In advance of the Premiertrak 600’s release, a handful of Powerscreen customers were given the opportunity to test the machine and provide feedback on its usability. Ed O’Donohue from Roadstone, who operated the machine at the company’s crushing and screening sites in Ireland, said, “We ran the Premiertrak 600E electric jaw crusher at a limestone quarry in Co. Meath and also used it to crush demolition concrete at a facility in Co. Dublin. When the machine first arrived, we were hugely impressed with the modern design and robust construction. For a machine in that class range at more than 70 tonnes, we expected it to be quite complicated to set up and get operational, but in fact the opposite was true. The machine was crushing within minutes of being tracked off the transport truck!

“The machine was fitted with its own on-board generator,” Ed added, “which, when coupled with the electric drive system allowed the machine to run very quietly and extremely smoothly for that size of primary jaw.

“In the limestone quarry, the Premiertrak 600E was using around 27 litres of fuel per hour and when all the calculations with the throughput figures were done, the overall cost per tonne was an awful lot lower than we imagined and astounding for that size of machine. When you see this machine in the flesh, it’s obvious that Powerscreen have used their years of knowledge and experience to design and engineer a machine will perform and last.”

Damian Power, Powerscreen Global Product Director, said, “We are excited to add the 1150 Maxtrak model to our cone crushing range. Packed full of new features, the 1150 Maxtrak crusher will continue to push the boundaries in the crushing and screening industry. Due to the feedback we have received during testing, we have every confidence that this machine will be a success.”