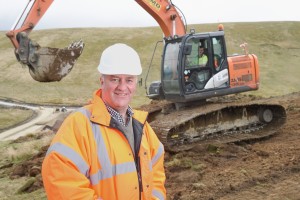 Fraser tells Gary Moug about his hopes for his presidency, the SPOA’s relevancy in the modern plant world and his ideas on how the industry should go about attracting suitably capable workers (young new entrants in particular) in a challenging economic environment.

Q) How did you get involved in the plant industry?

A) I followed on from my father Albert Munro Dykes. His initials are where AMD Contract Services Ltd gets its name. He started the firm in 1967. I left school and served my time as a plant fitter with a firm in Dumfries before driving mobile cranes for a couple of years. I then went to New Zealand and was shearing sheep – not much of a difference!

When I came back to Scotland I started working with my father. It wasn’t a plan as such, I initially thought it would just be a short-term thing and that I’d get back into crane driving. That was in the mid-1980s. At the time my father was predominantly a land drainage contractor in the Agricultural sector. We worked away on a small scale until he retired in 1996.

My brother Trevor and I took the business on then and we started to move more into forestry and construction work. Through steady growth, we’ve gone from a £100,000 annual turnover to over £5 million.

Q) How many employees do you have?

A) It varies depending on the time of year. We have a hard-core staff of about 50, which increases to around 70 at the busiest times.

In my opinion, to have a successful business, a successful relationship with your employees is vital. As a team leader, you get far more back if you work with your staff and are seen to be doing what they do. I’m not one of these employers who thinks an employee is only there to work for you and his duty is to make you money. I like to get out there with them operating the machines when I can.

Q) What’s the purpose of the SPOA?

A) The purpose, in my opinion, is to represent our members (between 250 and 300). Without a doubt the main attraction for membership is the association’s “terms and conditions” of hire. This gives the security for members and insurers alike of a legally binding contract whilst our members’ expensive machinery is in the care of other people.

The executive committee also gives our membership a voice right up to Government level, particularly with things like contract procurement, training and health and safety. Also importantly, we gather folk together for networking and social events. I think it’s important for people who work in the same industry to be mixing and sharing views. You can’t beat hearing other people’s problems and putting them all together to solve them.

It does grind me when folk say the SPOA, or any other association in different sectors, is just a talking shop or a waste of time. I think a lot of good stuff comes out of it and the SPOA is more relevant today than it’s ever been, especially with factors like health and safety and standards being raised all the time for training needs.

Q) If there’s one thing you could change about the industry what would it be?

A) My big bugbear is government-funded projects which they allow to be procured outwith the regions. There’s no way a London company should be in charge of plant hire on major Scottish construction projects when there are companies in the locality capable of doing the job. Things should be kept closer to home. During the procurement process, some companies say they’ll do this and that, tick all the boxes and say what the decision-makers want to hear. But this doesn’t get audited and policed as rigorously as it should.

Q) How do you relax when you’re not working?

A) I love motorbikes and socialising. MotoGP’s my big thing and I’ve been to see GP’s in Australia, America, the Middle East and throughout Europe. I have a Honda Fireblade road bike and a Classic Bultaco 360 scrambler. Also I have a small holding and am a bit of a hobby farmer.

Q) What do you hope to achieve with your presidency?

A) I want to better the intake into our industry. We need to attract new talent and see the re-entry of some of the tremendous people we’ve lost in recent years.

The industry is really struggling to find good, qualified people to do the jobs and I’ve got a few ideas about how to change this.

Everybody goes on about training. This is important, but we’ve already got training – there are plenty of good training programmes out there and qualifications. It’s the experience we need. You can’t buy experience. We’re all fighting over the same experienced men.

At the moment, plant operatives are being put in charge of anything from £20,000 to £500,000+ worth of kit. Every other sector in the construction industry – be it a builder, painter, plumber, electrician, etc – can go into a college and do a foundation course for their chosen job.

But for plant operators – often young guys coming out of school – that option’s not there. They’re totally reliant on working on an apprentice scheme.

The CITB apprenticeship schemes have worked tremendously well for me, and AMD as a company, down here in Dumfries where we have a rural setting. We know the boys before they come to us. They’re from a local farm or school.

But listening to my colleagues in the SPOA who are based in the central belt, the schools will maybe send them folk as possible apprentices who have no basic skill of machinery at all. That’s not knocking them, it’s just a fact. Whereas our apprentices have come off a farm and been driving tractors for years or sitting in the seat watching their dads do it, in the inner city areas that’s not the case. And yet the employers have to commit to a two-year scheme.

I’d like to see a foundation course for plant operatives available at agricultural colleges across Scotland. They’ve got the land, they’ve got classroom and workshop facilities and it would be easy to get a mock construction site set up.

I’m sure machine manufacturers and dealerships could get involved by loaning machines to the cause. After all if there are no operators there will be less demand for their new machines. It’s time industry and government pulled together to help solve this huge problem we have.

The great advantage of such a course is that the candidates would be up and running and ready to work.

Q) What advice do you have for youngsters considering a career in the plant industry?

A) I’d absolutely encourage it as a career choice. There are lots of opportunities and well-paid jobs. I know operators earning between £40,000 and £50,000 per year, driving a digger.

It’s an industry which opens up your horizons, allows you to move about and meet different people.

Working on a construction site also teaches you discipline and it’s an industry where you can go in at the bottom and reach the top. There are guys who started out as welders, plant fitters and digger drivers who are now running major companies.

Once you’ve established your footing, the worldwide opportunities are there too. It seems to be that wherever you go in the world, if you go on a construction site you’ll find British and Irish workers. So it’s a job you can travel with and proves the talent and ability is out there.

Q) How do you feel about the standing of the industry at the moment?

A) I think the plant-hire industry in Scotland has been kept on track by the renewable energy sector. We actually grew our business during the recession because of this and it’s becoming more prevalent.

I see the renewable sector being like crop rotation as the wind farms will need updated. The first wind farm we were involved with was in the late 1980s and is being upgraded now.

Obviously now housing appears to be getting back on track and major infrastructure jobs like the Forth Road Crossing, M74/M8 upgrade and Aberdeen bypass are well underway. And with the M9 upgrade on the horizon too, things are looking fairly positive.

Q) What’s the best advice you’ve ever been given?

A) Easy, “Call It How it is”. My uncle Jimmy Dykes told me that.