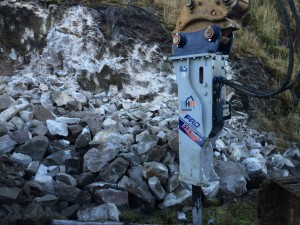 CALLUM Mackintosh, owner of Highland Hammer Hire, is aiming to become THE one-stop destination for attachments in the north of Scotland.

It may seem like a lofty ambition for a company which only started trading last year – but Callum has hit the ground running.

Despite being a new business, Highland Hammer Hire is already in process of moving to new premises in Inverness and the appointment of its first employee is imminent.

Callum said, “The business started out just hiring out rock breakers but we’ve grown very quickly and we’re now involved in the sales of buckets and many other attachments.

“My background is in construction. I was a plant operator for a family business and prior to that I was involved in plant sales. I always intended to go into business on my own but never thought I’d end up in attachments!

“Business has been great so far. We’re now an ESCO distributor and I’m looking to grow the wear parts side of things.

“I really want to be the one-stop place for attachments in the north of Scotland and I’m looking at putting a van on the road to cover the service side.

“But I’m not limiting myself to the north of Scotland. I’ll travel anywhere – it might be a hydro scheme in Perthshire or Loch Lomond, or on the Islands.”

All the firm’s hydraulic hammers are Furukawa and the hammer range extends from 1.5t to 65t machines.

Highland Hammer Hire is currently based in Drumnadrochit but with the business growing all the time, Callum told Project Plant that plans are afoot to move to a more permanent base in Inverness. “I’m sorting this out at the moment and I have a place in mind,” Callum revealed.

“It’s a central location in Inverness as I really need to be in a dedicated yard space. This will allow customers to get us more easily and, importantly, allow us to ship out parts more quickly as all the carriers will be right on our doorstep.

“We’ll be able to react quicker to customers’ needs. I’m very proactive. If a customer needs an attachment at 7am the next morning, I’m there.”

Callum will be exhibiting at the Black Isle show in August – by which point he should have his first employee in place.

“I probably didn’t expect to be in this position so quickly,” Callum admitted. “We’ve grown so much that I need to take somebody else on.

“We’ve been involved in all sorts of projects so far, such hiring hammers onto micro-hydro schemes, the new Inverness Campus and at Dunmaglass, one of Europe’s highest wind farms.

“I couldn’t have started at a better time as people are looking to invest in new equipment. Just this morning I got an order for a cutting bucket for a big canal drainage job.

“Long-term, I hope to see us in a better position with a larger range of attachments to suit the needs of all the upcoming contracts that are happening.

“I hate saying no and turning customers away, which doesn’t happen often.”