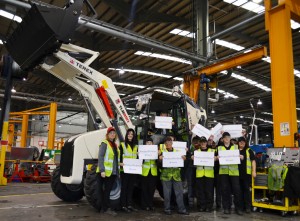 Terex Construction has announced its commitment to inspiring the next generation of female engineers.

Linking in with the UK government’s #NotJustForBoys campaign, the Terex manufacturing facility in Coventry, which produces Terex compact construction equipment and Genie scissor lifts, is implementing a number of new initiatives to encourage women to consider a career in manufacturing.

From internal development programmes for current team members to dedicated open days aiming to inspire the engineers of tomorrow, Terex aims to meaningfully increase its female staff figure over the next 12 months.

Neal Nowick, General Manager at Terex Coventry, said, “We are committed to promoting wider diversity across the industry and supporting women in the workplace. Our mission is to encourage a greater gender balance within our own team, as well as the wider industry. We fully support the government’s #NotJustForBoys campaign and encourage more companies to get on board.”

Terex team member Helen Doughty said, “After attending the recruitment open day last year, I was offered a role at Terex and haven’t looked back. Even though some may consider this as a male-dominated industry, I would encourage anyone who is thinking about perhaps changing their career path to look towards a job in manufacturing.”