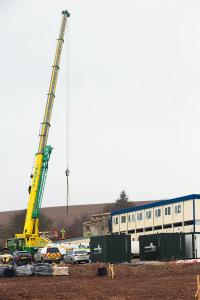 Aberdeen-based Greenwell Equipment (Greenwell) is in the process of assembling and delivering 60 large two-level modular office blocks to form the AWPR/B-T head office.

The Aberdeen Western Peripheral Route (AWPR) is a new road being developed to improve travel in and around Aberdeen and North-East Scotland.

Assembled in a two-level format to provide office accommodation for 200 staff, the modular buildings are being full refurbished to meet the specific requirements of the AWPR/BT project. 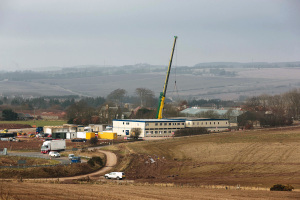 Richy Turnbull, spokesman for Greenwell said, “This prestigious contract win is a testament to the growing reputation for Greenwell’s ability to source and deliver large modular buildings. The Head Office will be a focal point for the long-anticipated road, and having lived in Stonehaven for a number of years I can see benefit having this prestigious facility to the local community.

“Other recent important contracts for Greenwell include the provision of a Headquarters building for Balfour Beatty at Inveramsay, which will be used during the realignment of the A96 at Inveramsay Bridge north of Inverurie.   We are also also continuing to supply modular buildings to the new Forth Replacement Crossing, the Queensferry Crossing.

“We are very proud to be working on the Inveramsay Bridge, the spectacular Forth Replacement Crossing and the AWPR/B-T, three of the most important transport projects in Scotland.”