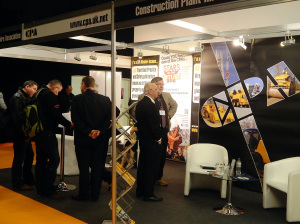 CPA is planning a number of small round table briefings and workshops on the stand covering topics including Operator Competence: BIM, Mobile IT, Medical Fitness Drugs & Alcohol, and the Public Health Responsibility Deal: Telehandlers, including new work on Suspended Loads and Ground Conditions.

CPA’s new projects for 2015, Inadvertent Operation of Controls on excavators and Lifting Using Excavators, are also on the agenda.

CPA Stars of the Future 2015 at Plantworx

The CPA’s 2015 ‘Stars of the Future’ Plant Mechanic Apprentice Awards will also be held on Thursday 4th June at Plantworx.  The Stars of the Future competition is an annual award scheme, now in its 3rd year, devised by the CPA to recognise talented youngsters on plant mechanic apprentice schemes in colleges across the UK.

The CPA is working with the 11 participating colleges to recognise and reward even more apprentices from each college. In the inaugural competition in 2013 there were 489 entries – in 2014 there were 592 entries and for 2015 there are a staggering 1000 students participating!

The awards will be presented by Richard Noble OBE, pioneer of the Bloodhound SSC project, where in 2016, Mr Noble and his team intend to break the land speed record with a 1000mph dash across the African desert.

Full steam ahead for ScotPlant 2022