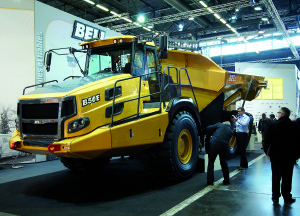 BELL Equipment is “hugely satisfied” with their performance at Intermat 2015.

So says Gary Bell, CEO of the global ADT specialist. “Visitor attendance didn’t reach that of 2012, but we were once again impressed by the high calibre of our guests, which led to professional contacts and intensive expert discussions,” he said. “The international attendance clearly reflected the local market situation, with a little but very interested overseas fraction from the Northern Americas and Africa and large European representation, especially out of the booming UK and Scandinavian markets. With all our global market regions represented through their respective branches on the Bell stand, we were able to fully reach our aim, to use Intermat 2015 as a broad platform to present our latest products and to inform about our continuous R&D activities and further improvements in our customer-oriented service and after sales operations.”

The new E-series generation of Bell Equipment’s small ADT trucks from 25 to 30 tons attracted keen interest. The new Mercedes-Benz engines now installed in the smaller models (Bell B25E and B30E) have a combination of “light” exhaust gas recirculation (EGR) and AdBlue injection (SCR) ensuring that Bell ADTs meet EUIV/Tier 4 final regulations without the need of Diesel particulate filters (DPF). “This is a major advantage in construction and quarrying applications, which was confirmed on the show by many machine owners and operators,” said Bell Equipment’s Director of European Operations, Marc Schürmann, stating avoided regeneration cycles and easier maintenance. “Furthermore both models score convincingly with yet more gains with regards to fuel efficiency, something for which Bell is already seen as the industry leader.”

This also applies to the new active Front suspension “Comfort Ride” for the smaller trucks, which made its debut in Paris. “Once again Bell Equipment has become a pioneer in ADT technology, as we did in the past with the introduction of standard onboard weighing, adaptive 6×6-suspensions and electronic assistance to improve both the operator’s comfort and safety,” said Marc Schürmann.

With a prototype of its Bell B50E – still acknowledges as being the world’s largest production 6×6 – Bell Equipment gave an insight to the state of development of its larger E-series trucks from 35 to 50 tons. The introduction of four new models is to be expected in 2016, with all of them also being equipped with EU4/Tier4final emission technology without the need for a DPF. All models are now powered by straight six-cylinder Mercedes-Benz engines, which according to Bell, have already proved their high fuel efficiency during pre-series model testing.