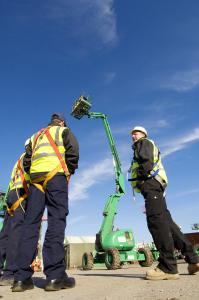 A-Plant’s Customer Training Division has scooped a major award in Washington, DC, after triumphing at the International Awards for Powered Access (IAPAs) which were hosted in America last week in conjunction with the IPAF (International Powered Access Federation) Summit.

Following a judges’ meeting in Paris, France, earlier this year, A-Plant was declared ‘IPAF Training Centre of the Year 2015’ at the IAPAs, said to be the world’s most prestigious access industry awards ceremony. The awards were held at the Crystal Gateway Marriott Hotel in Arlington, Washington, DC.

The IAPAs attract entries from companies all around the world. The independent judging panel comprised the likes of Daniel Duclos, Owner and Chairman of French manufacturer ATN; Alastair Robertson, Owner and President of Universal Equipment based in the USA; Søren Rosenkrands, Chief Operations Officer at Netherlands-based rental company Riwal and Alexandre Saubot, Chief Operating Officer of French-based Haulotte.

Bob Harper, Head of Training at A-Plant said, “It is a tremendous honour for us to receive this accolade, especially as rental companies from all around the world were in contention for the award. This confirms A-Plant’s status as a leading provider of working at height training which assists organisations to have injury and incident-free sites.”

In 2014, A-Plant delivered IPAF training to over 1,800 customers. A-Plant Training continues to grow and offers one of the industry’s most extensive ranges of Health and Safety, bespoke, product-related and accredited training programmes to help customers comply with ever-changing legislative demands.

With Training Centres of Excellence across the UK, A-Plant has been an accredited IPAF training provider for a number of years and is also accredited by the National Plant Operators and Registration Scheme (NPORS). As well as IPAF courses, A-Plant is approved to deliver City & Guilds, PASMA, Lantra Awards, St John Ambulance and ConstructionSkills training.