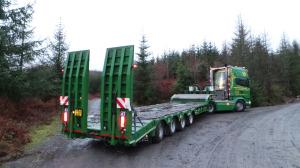 A timber harvesting company has replaced an eight-year-old Andover Trailers step frame with a new bespoke-built trailer from the company, after being impressed with Andover’s attention to detail and the proven build quality of its trailers.

David said, “We bought our first trailer from Andover in 2006 and it’s been a really valuable asset to the company. However, as our business has expanded, we now move increasingly larger machines and we really needed a trailer with additional capacity.”

As the company’s sole trailer, the new SFCL 73 will operate with a Scania tractor unit and be in use six days a week transporting plant across Scotland. The trailer is built with two fixed and two self-steering BPW axles. Heavy-duty hydraulic steady legs ensure a safe and stable platform when the trailer is parked on uneven ground, even deep in some of Scotland’s largest forests.

The specification also includes BPW air suspension, which enables the driver to quickly lower the trailer for loading and unloading. It can also be raised when operating off-road, to ensure maximum ground clearance.

It has been finished in ‘John Deere green’ paintwork and is expected to remain in service with Jim Wilmer & Sons Timber Harvesting Ltd for the next decade.

“Being able to design the trailer to our exact specification was a real draw in placing a repeat order. Andover has built us a trailer that helps make running our business easier – which is fantastic”, added David.

Other features on the trailer include hardwood flooring and side extensions to the bed, bridge and beavertail. The customer has also specified the trailer with full LED lighting and strobe lights on the rear of the ramps, to ensure maximum visibility at night, in line with the company’s strict safety policies.

Jim Wilmer & Sons Timber Harvesting Ltd is a family-run business and was founded more than 30 years ago. The company originally began by felling trees and selling firewood, then quickly diversified into timber harvesting. It has since expanded to become one of the largest timber-harvesting contractors in Europe.