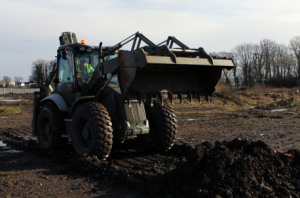 HAVING started as a private soldier in the Army Reserves in 1994, Dave Hanley, now Capt. Dave Hanley, has managed to turn his beloved hobby into a full-time career.

Regarded as the construction arm of the Army Reserves, the 71 Engineer Regiment, consisting of three squadrons including 102, specialises in plant operation and offers a range of training for drivers, operators, signallers, combat engineers, logistic specialists and more.

With an array of tracked and wheeled military plant machines, including light and medium wheeled tractors, dozers, rollers and excavators, plant operators are trained to construct and upgrade vital military base infrastructure.

Building and maintaining tracks, installing drainage systems, assembling barracks, working with hesco bastions and digging vast trenches and protective zones round encampments, 71 Engineer Regiment must be prepared to help the regular Army live, move and fight, should they be deployed in operation.

“Some people get put off by the idea of going to war, but ultimately that’s the bottom line: you’re there to support the regular Army in times of need.

“When our guys sign the dotted line, they understand that they’re there for the bigger picture,” explained Capt. Hanley.

“I joined as a sapper, which is a private soldier, away back in 1994 remaining in the ranks for a few years prior to being commissioned in 1997 as I wanted to make a difference. In 1999 I deployed to Bosnia and was away for roughly nine months. I was just a young second lieutenant, brand new out the wrapper.

“It was exciting. It was a learning experience. I thoroughly enjoyed my time out there and met some great people.”

After working as a Watersports Instructor at Strathclyde Country Park for eleven years whilst maintaining an active military service, Capt. Hanley understands more than most the difficult balance between civilian work, the Army Reserves and family life.

“If you imagine it as a triangle: you’ve got your civilian work, the Army Reserves and your family. Some people get the balance bang on but others do struggle.

“Maybe they’re doing too much in the Army Reserve and their family’s going to struggle as a result, or maybe their work really needs them and the shift patterns don’t work.

“That’s fine, as long as they communicate to us and say ‘Listen, I need a bit of time off just now’, we’ll then work to re-source that and get it covered.”

Capt. Hanley added, “You can work up to 117, what we call, man-training days per year, so that’s a third of the year, without having to go for any further authorisation. But there’s scope for what’s called an ADC (Additional Duties Contract) to work up to 207 days.”

With an in-house driving instructor, 102 Squadron, when required, will teach recruits to drive and pay for both their theory and practical driving tests, before helping drivers obtain their CAT C Heavy Goods license with the aim of progressing onto plant machinery.

Training once a week on drill nights, the reserves also take part in monthly weekend excursions as well as a mandatory two-week trip each year to qualify for their Army Reserve payment. Plant operating theory courses and classes are conveniently taught in-house in the squadron’s Hawkhead site; and just a ten-minute drive from their facility, the squadron has a vast yard of terrain and a large aircraft hanger currently being developed for practical lessons in artisan skills and training in plant machinery.

Something of a plant operators’ playground, the Barnsford site has a strip for Counter I.E.D detection, an area for assembling life-size Forward Operating Bases (FOBs), land for practicing drainage installation and maintenance, bridge building, excavation and more.

“From when I joined, away back in 94, the opportunities now are incredible,” added Capt. Hanley. “In terms of overseas exercises we’ve got guys going to the Falklands, Kenya, the USA, Cyprus. I think people look for something different. It’s certainly not about the money; a lot of people don’t even realise the Army Reserves get paid. Unlike America, a country that’s big on their forces, people here really don’t understand it. Some people have got this sort of Dad’s Army impression of it: ‘What? You deploy as well with the regulars?!’

“There’s a lot more focus now on the one Army concept, Regular and Reserve integration is massive. However for it to be truly integrated the reserves need to be trained up to a certain standard.

“What else attracts people to the reserves? The camaraderie; the skills that you learn; the variety of things that you can do and the opportunities that you get.

“These are friends for life. You don’t really have much time for a social life if you’ve got a full-time job, a family and the Army Reserves. This becomes your social life.”

Warrant Officer Class 2 (WO2), Bhim Saru, has recently joined 71 Engineer Regiment following an extensive military career with the Queen’s Ghurka Engineers Regiment in Maidstone. Born in Nepal, WO2 Saru, whose father served in the British Army, is now celebrating 22 years in the Armed Forces this year. A trained Highway Engineer, WO2 Saru has been deployed in Bosnia, Kosovo, Iraq, the Falkland Islands and in Afghanistan for Operation Herrick six times.

Now working as a Military Plant Foreman (MPF) and Quarter Master Senior Instructor for the Army Reserves, WO2 Saru is responsible for advising the Commanding Officer and Operation Training Major on construction projects and plant equipment. WO2 Saru also plans and facilitates all mandatory training that the Reserve soldiers require.

“In the last few months, I have led some route upgrading at Rothimurchus lodge in Aviemore, bridge abutment for an 18m long metal footbridge at Glen Affric in support to the World Orienteering Championship Association and culvert construction projects in various locations from initial conception to completion,” said WO2 Saru.

“One of my highlights is I designed and oversaw a bridge abutment construction for an 18 m long metal footbridge at Glen Affric during Annual Camp in September 2014. The abutments were built using gabion baskets and filled with 100 – 150mm rocks to take the load from the bridge. Although the abutments construction looked easy it needed so much time in design calculation, planning and close supervision during the construction.”

Often recruiting from colleges and universities, 71 Engineer Regiment is a mixture of men and women, employed, unemployed and students. Outwith the hands-on engineering, artisan and plant operation skills that the Reserve soldiers gain, they are also offered leadership development courses and adventure training programmes.

Although not all of the personnel will have first-hand experience of deployment or military work abroad, Capt. Dave Hanley considers it amongst his most memorable military experiences.

“For me personally, one of my highlights was as a Project Officer in the Ascension Islands, which is halfway between here and the Falklands. It’s one of these places where the turtles will come up and lay their eggs on the beach, it’s volcanic in nature and the landscape was just phenomenal, it was almost moon-like in places.

“To go to a place like that was fantastic and you get the balance right between the construction tasks that we had and making it interesting. The tasks, the location, the camaraderie, the sports, it was amazing.