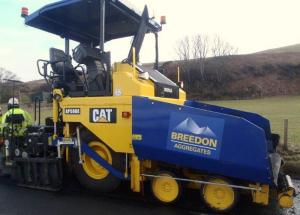 Steadily improving market conditions were cited as a major reason for the positive results and nearly £50 million was invested in acquisitions and on capital projects.

Peter Tom, Executive Chairman, said, “We are pleased to report another year of significant progress, with results strongly ahead of 2013. These were driven by steadily improving market conditions, healthy contributions from acquisitions, the benefits of continuing capital investment and solid organic growth in the underlying business.

“As we enter our fifth year since the creation of Breedon Aggregates, the Group looks very different to the business we acquired in 2010. Sales revenue has nearly doubled, EBITDA has risen almost threefold, the balance sheet is strong and we have a stable, experienced management team in place.

“The economic outlook is the most favourable for our industry since the end of the recession. Construction output and demand for our products are expected to increase over the next three years and infrastructure in particular is expected to grow strongly in 2015-18 on the back of recently-announced public spending plans. We continue to see many opportunities to grow and improve our business and we are confident that we will make further progress in 2015.”