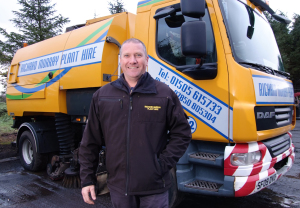 AT the tender age of 24, Richard Murray started his own plant hire firm with a solitary JCB excavator.

Richard, whose firm’s headquarters are in Houston, Renfrewshire, said, “I joined Malcolm as a plant operator at the age of 17 and decided to set up on my own seven years later. In the early days, I ran excavators and covered west central Scotland, hiring to builders and civil engineering companies. My big break came when I hired a seven-year-old JCB 3CX to R J Levack who were constructing the Johnstone bypass. I started every day with a prayer that the old machine would make it through to the end of the shift!

“It was during that project that I was asked if I could supply a specialist machine for sweeping duties. At the time I wasn’t even sure what it was!”

That conversation led Richard down a path which would eventually transform his business. “I bought a used road sweeper for about £20,000,” he recalled. “It was used four days a week on the Johnstone site and then on the Luss bypass project too, which was being built by Morrison Construction.

“Things snowballed from there as I started picking up work from housebuilders and on motorways. Soon the diggers were replaced with road sweepers, and the fleet rapidly expanded to enable contracts as far and wide as Stornoway Airport for six months and Edinburgh Airport for eight months.”

Airport work remains a core part of Richard’s business and his firm is the preferred sweeping contractor at many Scottish airports. Richard added, “Airport work is very time critical. If the runway is late to open, you can have a plane circling. You need good guys and good machines. We were hired last year to sweep the runway at the airport in Campbeltown, which is one of the largest in Europe and we managed to do it in 18 hours. Soon after that it was up to Inverness with four sweepers for 21 nights to resurface a section of the runway.”

“One of the ways we stand out in a very competitive market is by getting new equipment,” Richard said. “Very few companies will spend what we spend on sweepers and I try to replace the sweepers once they are five-years-old. I cherry-pick clients I want and as we’ve had next to no bad debt for the past five years, it seems to be the correct policy. I’m happy with the client base I have and don’t go chasing extra work. I’d rather focus on keeping our existing clients happy and achieving a healthy work/life balance.

“Over the last few years the sweeper hire industry has got more competitive with the rates struggling to rise in some areas. You’ve got guys spending £20,000 on a sweeper, charging less for hire and driving rates down. I feel you need to be more specialised now. It’s better to do one thing and do it right. Sweepers are so specialised, and I can name ten companies off the top of my head where drivers wrecked machines in the first week due to driver error.

“I don’t do much work now for housebuilders. Instead I focus on other areas such as supplying compact sweepers for hard to access areas like underground car parks, internal footways and inside factories.

“At one point we had a fleet of 16. That number is now nine and I’m happy with that. During the recession, we cut our cloth to suit.  We currently have nine drivers. Good ones are hard to find and we do the training ourselves. One of the biggest challenges is keeping good drivers and I lost five in one year to a large construction outfit. But it’s a great industry to be a part of. You get to meet lots of different people and see different aspects of construction industry. One day you could be on a building site in Glasgow, the next you’re in an Oban car park or Inverness Airport.”

With an ongoing renewal policy with Johnston sweepers for the next 12 months, the future looks very bright indeed.