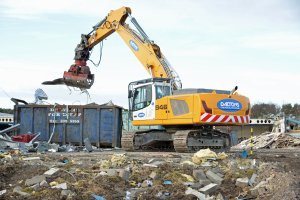 EDINBURGH-based specialists, Daltons Demolitions has recently upgraded and increased its fleet of demolition excavators with a large order from Liebherr.

The firm has purchased the five machines specifically to undertake demolition and recycling operations on forthcoming projects around Scotland and has commenced the demolition of a redundant industrial complex in Haddington, just off the A1.

The complex was once home to the Mitsubishi Electric Company who extended the original site and used it as a base for the manufacture of televisions up until the late 1990s. When Mitsubishi vacated the premises, the factory was split into two with a printer and sports surfacing manufacturer taking over the lease. With the two companies vacating the premises in the last 18 months, a national housebuilder has purchased both the property and the adjoining land with a view to developing it for local housing and light commercial use.

The neighbouring site has been purchased by Sainsburys who are looking to develop it into a supermarket. To facilitate the redevelopment of the site the new owners let the contract for the demolition of the buildings, along with the grubbing up of the concrete slabs and foundations to leave the site clean, tidy and level, in readiness for the construction teams to commence their work.

Daltons runs a mixed fleet of equipment but the most recent purchases from Liebherr mean the bulk of the fleet is now sourced from the German manufacturer through the UK based Liebherr-GB. The order from Liebherr consited of a pair of 22 tonne R922 excavators, a pair of 40 tonne R946 excavators and an LH30 wheeled material handler. All four excavators are to full demolition specification complete with full cab guarding, superstructure side protection and full auxiliary hydraulic pipework. Both R946s have come complete with straight booms to give almost an extra metre of reach.

The R922 and the latest R946 excavators have been supplied with Hill Tefra double locking quick couplers while the first R946 delivered came with Liebherr’s own fully hydraulic coupling system, Likufix. The Likufix system enables full attachment changeover including hydraulic and electric functions, to be changed from the cab.