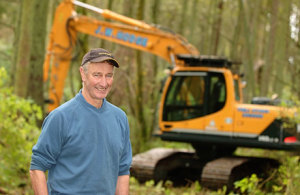 Working alone for eleven hours a day in remote, and sometimes dangerous, locations might not sound like everyone’s cup of tea – but John Hodge wouldn’t have it any other way. Project Plant finds out why John swapped noisy building sites for idyllic forests.

JOHN Hodge is a one man, one machine operation. He travels to locations all over Scotland with his Hyundai R140LCM-9 excavator, carrying out work primarily on overgrown forests.

John mainly gets his work via recommendations from a forestry adviser working in the Edinburgh area and, with over 20 years in the business, has built up an enviable reputation.

“My background is in farming,” John said. “I started out working at the family farm in Carnwath, Lanark. I also did bits of farm drainage and construction.

“When I left that I went into pure construction work, like housing sites. But the farming side in me meant I couldn’t settle down working on a building site.

“I found forestry was as close to farming as I can get.

“I get to work in some stunning places. It’s a lovely life. You really have to put your heart and soul into it. You’ll never be a millionaire doing this, but compared to working on a building site and digging foundations, for me this is a brilliant way of life.”

“This is a job where, when you leave at the end of the day, you can see the difference your work makes,” John added. “I go to sites, clear all the rubbish away, make everything accessible and turn forests into something that’s nice looking again.

“There are roads to be repaired and a lot of what I do is cleaning ditches. Ditches can be become filled with shrub. The water builds up and the trees start to go down.

“One job I really enjoy is clearing woods that are full of rhododendrons. In one location near Loch Ness, there had been no access for years but, in the process of clearing, I found these old tin shacks. They had been used in World War One for practising digging trenches and the owner told me he hadn’t seen them since he was a young boy.

“On another recent job I got some lovely compliments from dog walkers. Normally when people see the big machine coming in and things being chopped up, they are up in arms and accusing you of raping the countryside. But on this occasion, because the woods had been such a mess for a long time, the locals were delighted someone was doing something about it.” 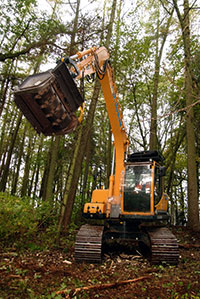 John admits that, while his family do worry sometimes about the dangerous conditions he works in, they’ve accepted the situation.

“Because I’m on my own, I need to have a good sole working practice,” John explained. “I need to have three phones on different networks so I’m always contactable. I have phone-in times with the office at home and the forestry adviser is always in touch.

“Touch wood, I’ve had no serious injuries – just scratches and scrapes. The worse situation I was ever in was up in Inverness. I was doing some ground prep work and, in the twilight of night, I started walking back to my pickup.

“It was a lovely night but I suddenly fell through ice down a three-foot rut and found myself up to my waist in ice cold water. It was carelessness on my part – that’s the only time I’ve ever really been caught out.

“You know when you work on your own that you need to be careful.”

“Forests can be a really dangerous environment,” John added. “That’s why I’m in there with a machine instead of a team of guys with chainsaws.”

John’s job has taken him to plenty of unusual locations. He was recently called in to help tidy up a large woodland near a monastery in East Lothian.

“The area was totally overgrown,” John said. “There were bits that hadn’t been touched for a long time. Parts were so overgrown that forestry advisers couldn’t even get in to do a survey of the trees.

“My job was to clear away the scrub and waste trees and turn the area into a good quality forest.

“I came across an old curling pond and a tree with a crucifix carved into it.

“I also stumbled upon a badger set, which had to be marked off. These sets are protected by law and I can’t operate a machine within 20 metres.

“The worry is that the weight of my machine might squash down the den on top of the badgers.

“When I see a badger run, I have to alert the forestry adviser, who’ll apply for a licence and hand cutters will come in and clear that section.

“My health and safety is less important than the badgers! During the breeding season, you can’t go near them at all.”

John has been using Hyundai machines for the past 15 years. His current model is a R140LCM-9 forestry spec machine. This model is normally sold in countries like Finland, where a lot of this type of work is carried out.

It’s a factory built machine with 700mm tracks for travelling over soft ground. It has heavy duty underbelly plates to protect the machine in the harsh working conditions.

The machine also has a high turret and extra ground clearance, keeping the machine raised above waste wood and debris on the ground.

John has bought his last three Hyundai excavators from Young Plant Sales. He said, “The Hyundais are ideal for forestry work because you need good oil flow to drive the head. If that’s not the case, you won’t cut the material. The Hyundai machines always have extra oil flow, which is a big advantage in this type of work. This allows me to run a smallish machine but still with enough power to cut everything away.

“Brian Young and Leigh Dalgleish from Young Plant Sales came out to see me at a site to learn a bit about forestry and see what extra protection was needed in terms of machine modifications.

“The new LCM model they suggested comes straight from the factory, designed to handle the work that I do with minimal modification.

“Overgrown forests are not good conditions for machines. Dents occur frequently so it’s important to have a model where parts can be replaced at a reasonable cost.

“The Hyundai stands up to this harsh application well, keeps me competitive, and that’s what it’s all about.”