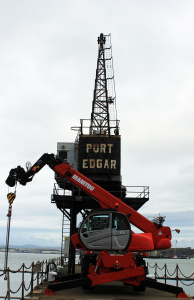 PORT Edgar Marina is situated on the Firth of Forth, with the iconic Road and Rail Bridges to the East and the new Forth Crossing under construction to the West.

The Port offers various services and storage for boats including nearly 300 serviced berths for boats of various sizes, outdoor hard standing and under cover storage.

Russell Aitken, Director, says that the important job is lifting boats in and out of the Firth for storage or carriage. Up until recently this has been achieved using a fixed craning system at the end of the pier.

The fixed crane was installed at the end of the main pier in 1964 by the MOD and since the marina started around the late 1970’s has been in constant use – that is until the arrival of the new Manitou MRT 2150+ Privilege.

Russell explained, “The main benefits of having the Manitou on site now is the flexibility of being able to crane anywhere on site. We can now carry out the lift at a more sheltered part of the pier reducing the number of days normally affected by the wind due to the fixed crane being exposed at the end of the pier.”

Previously the boats had to be moved to the crane and the masts inserted whilst the boat was bobbing about in the sea.

The rotary telescopic handler can drive anywhere along the pier, position the stabiliser legs and safely manoeuvre a boat of up to five tonnes.

The Manitou MRT can be controlled inside or outside the cab using handheld remote control so the operator can benefit from excellent visibility. “The wireless remote control feature means we have been able to reduce the staffing levels for a number of tasks, giving a more flexible way of offering a full service to the customer,” Russell continued.

The MRT2150+has the ability to tackle a variety of jobs due to the height and lifting capacity and the additional attachments required including a winch, bucket and work platform. This increases utilisation of the MRT2150+ for general maintenance as well as everyday tasks.

“We can now carry out work to the top of yacht masts without having to take the mast off the boats saving both the company and the customer valuable time.  We have also been using it for maintenance to the sheds and high level lighting on site where we would  normally have to hire in a cherry picker to carry out the work,” Russell concluded.