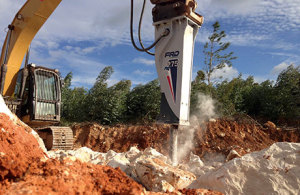 THE new Furukawa FXJ range – the next generation of hydraulic breakers – recently smashed its way into the UK market.

Andy said, “Sometimes when companies update their machines, only the box is changed – but that’s not the case with the FXJ breakers.

“They feature a new mono-block design (which eliminates separate cylinder, fronthead and through bolts) and are far more powerful.

“They’re very cost effective and downtime is minimal. For example, you only need a screwdriver to change the chisel.”

The improved design means no through bolts are needed, reducing the amount of replaceable spare parts.

The new range features four models – the 175, 275, 375 and 475. Within days of the breakers becoming available to the UK market, Relentless Plant sold a 475 – the biggest in the range – to Patersons Quarries.

Andy added, “Patersons are using the breaker for primary crushing and have already noticed a big difference.

“Compared with the older model they’d been using, the FXJ 475 has provided 15% extra power and nearly 1000 joules of extra energy in every strike.

“The box is bigger so there’s less dust. The new floating seal is excellent. Operators will really appreciate these changes too as they’ll no longer get the blame for not looking after them!

“No one can compete with the minimal repair downtime these new breakers provide. Customers will get a lot longer out of them and the lowest lifetime running costs.

“Essentially what has happened is that Furukawa took a breaker which was already pretty good and greatly enhanced it. No one was complaining about the previous range but the company is always looking forward. They’ve invested a lot of money in this.” 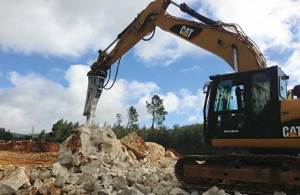 Business is going extremely well for Relentless Plant at the moment, highlighted by the fact they’re currently in the process of moving to larger premises in Cumbernauld.

As well as supplying breakers and demolition attachments, the core service they provide is plant repairs and servicing throughout Scotland.

Andy intends to hire another fitter at the start of 2015 and he reckons the signs for the industry generally are hugely positive.

“We’re getting a lot of new clients, such as Tillicoultry Quarries and Liebherr-Rental. We recently started dealing with Safedem (a leading Dundee-based demolition firm) and just received a nice order to supply Highland Hammer Hire with six new breakers.

“Buying a breaker is a big investment. It’s a lot of money so it’s good that we’re earning people’s trust.

“We recently started selling bucket teeth too, so we’re always looking at expanding our services.

“The plant industry is definitely getting busier and busier. You can feel the momentum gathering every day.

“This year, much shifting work started in September/October whereas last winter no one wanted to even touch it until January/February.

“In fact, the industry is growing so much that some people are struggling to find machines.

“There’s also a lot of cross-hiring going on because of a shortage of skilled workers.

“We need more courses for heavy plant mechanics because there’s not enough people coming into this game.

“We also need more companies to take on apprentices. Our current apprentice is now in his second year so we’ll be hoping to take on another one next year.

“Taking on apprentices isn’t very expensive and can be a great investment for businesses.

“If you get someone trained up, put them through courses, etc, they’re going to want to stay with you after they’ve qualified and help train the next one.

“I think some firms see it as a way of saving money if they don’t have apprentices, but this is short-sighted. When the recession hit, many companies cut back on apprentices and got used to not spending that money.

“But the problem is that we’ll end up with a gap in the market. This is quite an old industry and we need young blood for the future.”