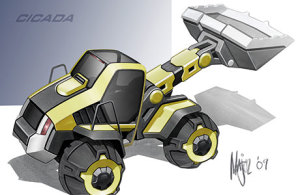 The aesthetic appearance of construction machinery is immediately recognisable, but to a casual observer the technical thought-process that influences their designs can be overlooked. The Industrial Design team behind the upcoming machines produced by Chinese construction manufacturer, LiuGong, shared their insights into the considerations impacting the current process in construction machinery design, and what might lie ahead in the future.

LEGISLATIVE changes, the safety and comfort of operators, and the continuous development of new technologies make the visual design of construction equipment a complex and intellectually challenging endeavour.

“Today’s end-user is more design savvy than their predecessors so aesthetics is a hugely important factor,” said Major, formerly Head of Industrial Design with JCB. “If something looks right, looks trustworthy, a little spark in the back of their brain immediately tells them it is going to be a good purchase.”

For a construction manufacturer attempting to succeed amongst a plethora of alternatives, differentiating the machines from its competitors can be difficult, but the influence of a tight-knit, in-house industrial design team such as LiuGong’s can be a defining factor before mechanical specifications even enter the equation.

“Consultancies can have a high turnover of staff so the consistency in the development of the form language can be a little uneven,” added Major. “But establishing a consistent brand identity is extremely important – often the end user will want to tag a machine with their company’s branding, usually at the expense of the OEM branding the machine leaves the factory with.

“Our own approach is already giving rise to LiuGong’s aesthetic evolution – in other words, the DNA will permeate every design and each machine’s lineage will be so obvious that you could trace its family tree.

“Solid form language and strong DNA can communicate the marque just as effectively as a set of decals – when was the last time you needed to see a badge before recognising a Mercedes-Benz or Aston Martin?”

Succeeding with this differentiation must take more into account than originality and consistency alone; the ability to influence a positive emotional response with the end user is one of an industrial designer’s most powerful weapons.

“The perception of quality will help to sell a machine,” elaborated Killgren, who having spent years in the automotive industry with Lotus and Bentley is now transferring his skills to LiuGong’s machine development.

“When you make contact with a machine, be it from a visual or on a tactile basis, if anything looks or feels cheap you assume the whole machine is inferior on an emotional level, irrespective of its specifications and usability. The impact of emotional triggers from a design perspective can never be underestimated.”

Major added, “As people, we are often unaware of the subconscious emotional tendencies that influence our decisions. This could even be as subtle as the colour balance between yellow and dark grey on a construction machine, which is easily relatable on an emotional level to examples in the natural world – think about the different ways you would react to a canary and a wasp.

“These things are second nature to us now – it’s one of the first things we look at when we see a machine, and acts as an overarching initiative in every LiuGong machine we design.” 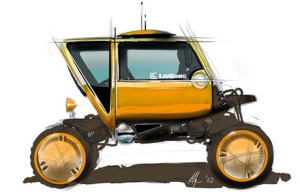 The challenge in defining any construction machine with a unique identity stems from the varying specifications that must be adhered to, be it as a result of engineering or regulatory demands.

Major highlighted an example relating specifically to the ever-growing legislative demands. The gradual progression towards the energy-efficient Tier IV Final EU emissions standards has had as much an influence on the design of construction machines as it has mechanically.

“One golden rule around five years ago was that an operator needed to be able to see an object one metre high from one metre away from the machine,” said Major.

“Engine emissions have changed components such as powertrains and the particulate filter assembly, growing their size enormously.

Because of that, engine enclosures are now huge which creates challenges in meeting sightline requirements, which in turn impacts the overall aesthetics.”

These challenges however, can be offset by the continuous development of new technologies – an area which LiuGong is actively researching and incorporating into its designs: “Developments in materials – especially in the area of composites – have allowed us greater freedom to explore form, and the increased aesthetic awareness from the end user has allowed us to push for bolder designs,” added Major.

“Up until now, an awful lot machines in this category used pressed steel; when you do pressed steel on a car, because you’re working with a very thin gauge of material, you can get the sleek detailing that you would generally associate with a car’s body.

“With construction bodywork, we are talking about 2, 3, 4 mm thick steel at times, so to get that level of definition has been very difficult. With composite technologies and the likes of injection moulding, it is considerably easier to attain the style of A-surface we want for future generations of LiuGong machines.”

The benefits of the advances in composite technology span further than widening the stylistic freedom a designer has too, as Major explained: “From a performance point of view, the materials we are looking at have an extremely high impact resistance.

“For example with hoods, there will inevitably be a considerable amount of spoil and rock landing on the machine – pressed steel machines dent rather easily as a result.

“With contemporary composites, quite often the materials will bounce off and there will be no visible damage at all.

“Certain materials can also be self-coloured within the mould, so if a machine is subject to high levels of abrasion, the colour is not going to scratch off like paint would. As a result of all this, these higher grade materials help the machine to age better, both in terms of maintaining visual appeal and minimalising potential damage.”

The value of new technologies enhances the design, as well as energy and operational efficiency, but LiuGong’s industrial design team still places great emphasis on the end-user.

For example, in addition to a highly accomplished engineering background, Wagner brings thousands of hours of operating various types of equipment in heavy highway construction.

“It is much more important to acquire knowledge directly, through experience or observations, than through questionnaires or other sources of secondary feedback,” Wagner explained. “Identifying the benefits these technologies have for the end user is indispensible information for us during the design process – that’s why LiuGong has operators within our large test organisation, and why we constantly seek feedback from actual customers who trial run our prototype machines.”

One area that demonstrates how new technologies can enhance this synergy of machine design, efficiency and operator ergonomics, is in the cab.

“Operator enclosures will become far nicer spaces in which to work – fully climate controlled with superb all-round visibility, pressurised for cleanliness and utterly intuitive to interface with,” explained Major.

“In the future, gesture control systems will likely take much of the difficulty out of driving these vehicles – for example, an operator could interact with the machine by wearing a glove with monitors in. He would use his hand to describe what movement he wants to action from the machine.

“There is a lot of research going on into that side of the industry – we’re not quite there yet, but it seems an inevitable evolution and one that we at LiuGong are very much engrossed in because of the avenues of creativity it opens for the design team.”

As technologies catch up with the direction of regulatory demands, the potential impact on both the performance and aesthetic design of construction machines will be significant.

Major concluded, “From a design perspective, my hope is that restrictions on the traditional internal combustion drives will lead to a push towards more exotic hybrid drive systems – that will help to shrink the package’s bodywork and give us greater creative freedom.

“Likewise, technologies cascading toward the construction industry like battery technology and energy recovery systems – be it an influence from the automotive industry, military or technological test-beds like Formula 1 – means that construction machinery design has a very exciting future.”

Safe Digging Week: safety on site is the national priority

The challenges and opportunities facing the construction sector