THE first anniversary of Hodge Plant becoming Scottish dealers for Case Construction is fast approaching – and what a year it’s been!

The partnership ended Hodge’s two-year search for a premium brand and both they, and Case, have gone from strength to strength as a result.

Alistair Hodge, founder and Managing Director of the Blantyre-based sales and rental equipment firm, said, “Our dealership with Case started on January 1. For the last 15 years we’ve been predominantly machinery dealers, exporting and importing kit all over Europe.

“We’d been searching for a premium brand when Case approached us. We looked at the product and realised it was first class.

“From Case’s point of view, we’ve helped build up their reputation in Scotland. There’s no point being a premium brand if you’ve not got the right dealers, offering good backup.

“We’ve had a lot of success with the Case machines in the first year. People who used Case in the past have come back and the Scottish market is getting more established now. We’re feeding the machines into the right people.”

Hodge Plant and Case have worked closely together in 2014 and have attended a number of high profile trade shows including ScotPlant, Hillhead, the RWM Recycling Show and the APF Forestry Event.

Since the start of 2014, Hodge Plant has positioned an assortment of Case machines throughout Scotland.

To date, the firm has placed in excess of 60 Case Machines to Scottish Customers.

Tina Neil, Scotland Sales Manager for Hodge Plant, said, “Within the Sales Division we have a great team – from the workshop, parts and accounts, it’s a privilege to be a part of the team. We’d like to thank our customers for their support during 2014.” 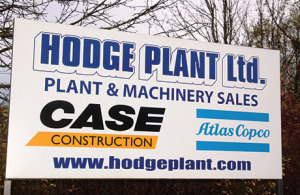 Hodge Plant has sold a very extensive range from the Case Series. Below is just a small selection that has been sold during the course of 2014;

Alistair added, “We’ve taken on more engineers, more sales people and two new apprentices. We’re expanding our depot and workshop and we’re opening a new depot in Aberdeen in early 2015, which will enable us to cover northern Scotland.

“We plan to transform our entire rental fleet to Case within the next 12 months.

“I think apprentices are very important. We look to train fresh, new staff and give them the training we want. They go down to Case’s depot in Basildon where they have access to modern software and technology.

“It’s important for them to receive training on Case machines as the days of people being able to just go out with a box of tools and fix things are long gone.”

Alistair started Hodge Plant back in 1986 with one wheeled excavator. “I was an engineer by trade and decided to give it a go,” he added. “I worked night and day to build the business and we now operate a Sales Division of Case Equipment, Rental Division, Quarry Division and Contract Crushing Division. We are also restructuring our Hire Division.

“I’ve seen a lot of peaks and troughs in the industry over the years. Big changes have happened in the likes of health and safety. There’s no place now for companies who haven’t moved forward.

“This is a time to be very careful with what you’re spending. It’s a very volatile market and the costs per machine and per man have gone way up. We’re always looking to the future.”

Scott Freeman, Business Director for Case Construction Equipment UK and Eire, said, “We are absolutely delighted with the performance of Hodge Plant in its 1st year as a full line Case dealer, we had a very good launching pad (at the) ScotPlant exhibition where Case and Hodge Plant were the largest exhibitor there, to truly demonstrate our intentions and commitments to the customers in Scotland.

“With the full product range offering and the investment in aftersales and service that Hodge Plant have made, we will continue to grow each year.”