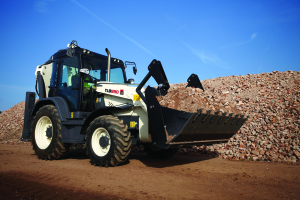 TEREX is launching a limited edition engine for its backhoe loader range to celebrate the iconic machine’s 55th anniversary.

The powerful 111hp Tier III 83kW engine will be available on a limited run of TLB850 and TLB890 backhoe loader models from this month, offering users exceptional performance, durability and reliability.

In addition to the special edition backhoes, Terex is also offering a series of 0% finance options, special promotions and a number of equipment competitions to celebrate its anniversary. The anniversary milestone comes during a busy time for the Coventry-based manufacturing facility, which is investing in product ranges across the key lines of backhoe loaders, site dumpers and compaction rollers and expanding its workforce.

Neal Nowick, General Manager at Terex Coventry, said, “We are extremely proud of our heritage as a UK manufacturer and are keen to mark this milestone for our backhoe loader range, which has secured a loyal following in its past and can look forward to new global markets in the future.”

The heritage of the Terex backhoe loader dates back to the Massey-Harris-Ferguson era of the 1950s and, in particular, commencement of production of the tractor digger shovel, the Three in One, built in Manchester, from 1959. This year the range is being extended to six backhoe loaders as more features and options are added. These products are exported globally from the Terex Coventry site in Great Britain to customers around the world.