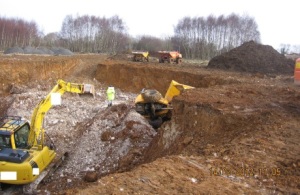 A Middlesex property development firm and a Buckinghamshire contractor have been ordered to pay a total of over £180,000 for safety failings after a worker was killed whilst driving a dumper truck during construction works at an ex-military base in Buckinghamshire.

Geoffrey Crow (48), from Eaton Bray, Bedfordshire, sustained fatal crush injuries in the incident at the former RAF Chenies site on 13 February 2012. The dumper fell into a deep and completely unguarded excavation, overturned and landed directly on top of him. He was killed instantly by the five-tonne machine.

Harrow-based Lois Gastoneaux Ltd and Michael Brett, a self-employed contractor working on the site at the time, were sentenced after an investigation by the Health and Safety Executive (HSE) identified serious safety breaches in their operations.

St Albans Crown Court heard that Mr Crow was working at ground level whilst others were working to excavate a deep basement for a swimming pool at a new build property belonging to the sole director of Lois Gastoneaux Ltd, Mr Kevin Andrews. The dumper went into the large excavation, which was up to 6.5 metres deep, shortly after he had freed the vehicle when it became stuck near the unguarded edge.

The HSE investigation found that despite operations being underway for some three weeks at the site, there were no measures in place to prevent people or vehicles falling into the excavation, or to prevent any collapse of the excavation faces onto those working below ground. Additionally none of the workers on site, five including Mr Crow, were used to operating plant machinery, such as excavators and dumpers, as large as those they were asked to use here. Neither did they have relevant construction experience despite being tasked with digging such a large excavation.

The seat belt on the machine Mr Crow was driving was not operational at the time of the incident, and his colleagues also stated they would not usually wear seatbelts when operating the machines. The court was told the range of issues were all contributory factors in the death, and that standards at the site fell well below those expected.

HSE Inspector Stephen Manley said, “Mr Crow died as a direct consequence of the lack of controls of the risks involved in the excavation operations. There was no protection whatsoever to ensure workers, whether driving machinery or otherwise, did not fall into the deep excavation. A number of people were at work with Mr Crow and they were all at risk of serious harm through the absence of physical controls, as well as poor maintenance of equipment and a lack of training and information provided to workers.”