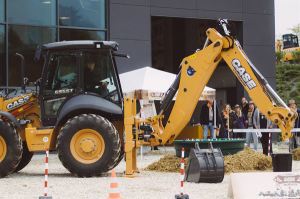 JANNE Leppänen, from Finland, has taken the title of best construction equipment operator at the 2014 Case Rodeo International Final, held in Monthyon near Paris.

After a spectacular tournament, Leppänen was declared overall winner among 42 highly skilled operators representing 15 nations from Europe and Africa. The ‘Best Team’ award was won by Denmark, thanks to the first-class performance and quality of its drivers. For the first time in its history, the International Final welcomed a team from Africa, with a delegation of three operators from Angola.

Operators, dealers and media representatives, together with the Case team involved in the event, had a unique chance to share ideas, strengthen their relationships in a festive environment and to enjoy a memorable time in the impressively beautiful Chantilly Estate.

The finalists were the three best operators of the national Rodeos in each country. They arrived at the Case Customer Centre on October 24th for an afternoon of machine tests before the Final. On October 25th, they competed against each other demonstrating their skills at the controls of Case equipment in four technically challenging contests of ultimate machine control, speed and precision operating.

The first challenge was “Little Wolf Wheel”, with drivers using a 321F ZB compact wheel loader to transport a pallet through a slalom path, before placing it in a perfect vertical position on another pallet in order to display a Case logo.

The “Speeding Spider Skid” required the operators to drive a TV380 compact track loader with a ball, in balance on a cone, placed inside the bucket. Once they reached a target area, drivers had to throw the ball to drop a set of nine skittles and then return to the starting point.

In the third challenge, called ”Big Foot Excavator”, operators were asked to insert a pin, hooked on the bucket of a CX180C crawler excavator, into four small tubes in a specific order.

“Black Hawk Loader” was the last test. Using a 695ST backhoe loader, competitors had to fish small plastic ducks from a pool using a hook fixed on the rear bucket of the machine and then place them into a basket without touching its edge.