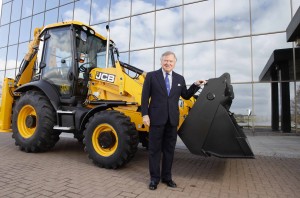 JCB Chairman Lord Bamford has been given the UK engineering’s highest honour in recognition of his outstanding contribution to the industry.

The Royal Academy of Engineering (RAE) announced he has been elected as an Honorary Fellow of the organisation that champions the cause of engineering in Britain. The honour comes in the year that Lord Bamford celebrates 50 years’ service at JCB and prepares to mark 40 years as Chairman next year. He said, “To be recognised by the Royal Academy of Engineering is a wonderful tribute to the contribution of the whole JCB team. I am as passionate about British engineering and manufacturing today as I was when I first started in 1964 and I am delighted to have been given the distinction of this Honorary Fellowship.” Lord Bamford is the only Honorary Fellow elected to the RAE out of a total of 59 new Fellows. The newly elected Fellows join the Academy from diverse backgrounds, including leading engineering and manufacturing companies and world-leading academic institutions. Professor Dame Ann Dowling DBE FREng FRS, President of the Royal Academy of Engineering, said, “Our newly elected Fellows bring an enormous breadth of expertise to the Academy, widening our collective scope and knowledge. I know that they will all make significant contributions to the Academy’s activities in their time as Fellows and we look forward to working with them to create benefit for society through engineering.”