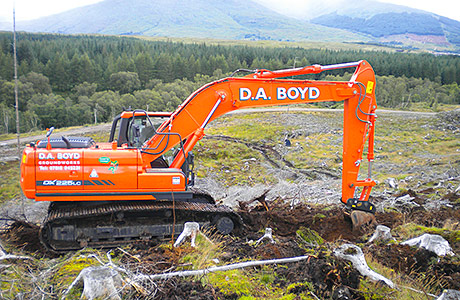 WHEN you’re working in isolated locations, with the nearest public road some 45 minutes away, it’s safe to say you don’t want your machines to break down.

The arrival of a DX140LC-3 14 tonne crawler excavator at D. A. Boyd Groundworks, based at Fort William in Inverness-Shire, extends the successful legacy of Doosan excavators at the company that stretches back to the early 2000s.
As well as the new DX140LC-3 model, D. A. Boyd has taken delivery of a DX225LC 22 tonne crawler excavator with a DX255LC-3 25 tonne model also on order, all supplied by Scotia Plant Ltd, the authorised Doosan and Bobcat dealer for the central belt of Scotland.
D. A. Boyd Groundworks was formed by Duncan Boyd when he was just 19 after he gave up his job working as an operator for a local contractor.
His fledgling business was soon winning enough business to allow him to trade in his original machine for a Daewoo 130 model, a forerunner to the new DX140LC-3 excavator and part of the Daewoo range purchased by Doosan in 2005.
Duncan later upgraded to a Solar 255 model, which is still one of six Doosan excavators in the fleet, including another two DX225LC models, soon to be extended further by the DX255LC-3 excavator.
A specialist in forestry work, the bulk of the company’s workload is in building forestry roads, ground preparation for new tree planting as well as some small civil engineering, hydroelectric energy and utility contracts.
Duncan Boyd said, “The Doosan machines have improved tremendously and have come on leaps and bounds since the Daewoo days. And we know that they will always be supported properly because the back-up service from Scotia is great.”
Typical of the duties expected of the machines in the D. A. Boyd fleet, as soon as it was delivered the DX225LC excavator was transferred to a trailer and transported behind a tractor to a job site deep in the thick woodlands in this part of Scotland, 45 minutes from the nearest public road.
Duncan Boyd added, “When you’re working in isolated spots like this, you need to be able to depend on your equipment.
“Even though we add additional protection such as full length track guards, belly plates, cab guards and other protective components to bring them up to forestry specification, the Doosan excavators are well suited for the work we do, which is usually in rough conditions and often in remote locations. If an excavator is required to operate in remote locations of this type, then the owner needs to know two things: that it is reliable and that the supplier will respond quickly in the event that something does go wrong.”
The DX140LC-3 crawler excavator has a more robust undercarriage with reinforced components, including track links, track springs and sprockets. The boom and arm have been strengthened by increasing the metal thickness at critical points and using reinforced bushings.
The engine bonnet is split into several parts to improve serviceability, whilst components such as filters, valves and batteries are all within easy reach for service work.