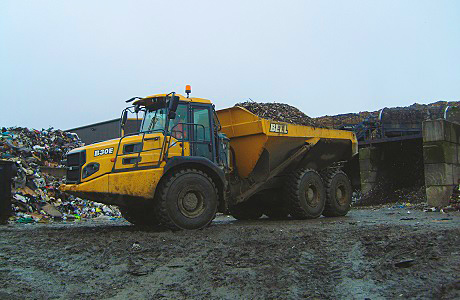 The need for a third truck became apparent when the compancy commenced site development works for a new ‘energy from waste’ plant – a heavy duty muckshifting task which necessitates the use of machinery designed to perform in challenging conditions.
They turned to a Bell Equipment TB30E ADT. The machine represents the third Bell ADT purchased by the waste management and recycling business, but is Levenseat’s first E-series, the next generation in Bell ADT design.
Angus Hamilton, Development Director at Levenseat, said, “On this occasion, we needed a truck that would be up to the task of intensive muck shifting.
“We’d had successful long-term results with Bell in the past, but didn’t want to under-research the selection process, so we trialled the current models of several competitors, alongside Bell’s B30E-series.
“I’m pleased to say that the outcome – was without doubt – very much in favour of the Bell B30E, which was by far the best performer.”
Levenseat has expressed extreme satisfaction with Bell’s vehicle and level of customer service.
“While it is still early days for the E-series, so far it’s safe to say that it’s doing its job – and it’s doing it well,” Angus added.
“This is another brilliant result for the E-Series,” said Sandy Fairweather, Bell Equipment’s sales manager in Scotland.
“And no wonder. The B30E ADT can tackle tasks that would confound other machines.
“It’s a high performing truck that’s powerful, fuel-efficient, hard-wearing and a pleasure to operate.”
Levenseat has chosen to invest in a model complete with Bell’s advanced, yet user-friendly fleet management system, Fleetm@tic – a satellite linked tool that can accurately monitor the usage, performance and efficiency of a machine before sending relevant data directly to customer’s computer systems.
Sandy explained, “It’s the first time Levenseat has used the Fleetm@tic system, and already it’s presented key information that will assist with productivity, as well as cost-efficiency. We understand that once this current contract is over, Levenseat will be holding on to the B30E for its own plant use.”