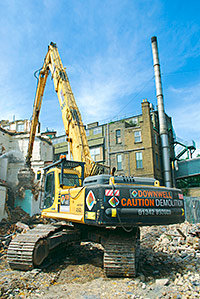 A FORMER children’s hospital is undergoing complete regeneration thanks to assistance from Downwell Demolition.

The Queen Elizabeth Hospital for Children in Tower Hamlets, East London, was formed from the merger of two separate hospitals during the second World War.
For the following 50 years the hospital provided care for sick children with the original facility expanded throughout this time.
Although the majority of Downwell Demolition’s contract centres on the demolition of the hospital’s buildings, it also includes a challenging facade retention operation at the front.
One of the first buildings to be dispatched was the accommodation block for nurses at the rear of the hospital. Once cleared of asbestos and soft stripped, the structure was delicately demolished by a Komatsu PC450 high reach demolition rigs complete with rotating grapple. This ‘soft-touch’ demolition was not only to improve reclamation rates but also to ensure minimal disruption to nearby houses and offices.
“This project happens to have one of the strictest vibration tolerances the company has ever encountered,” said Matt Phillips, Downwell Demolition’s director. “The local council has set a tolerance of one millimetre per second.” 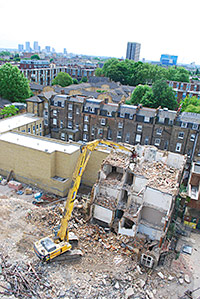 Downwell Demolition is now priming both the lofty Haywood building and the low rise Accident and Emergency block for outright demolition; a task that includes the removal of asbestos by the company’s own asbestos division, Inner City Environmental.
The original Victorian building at the front of the site is also set to be demolished but its street front facade will be retained.