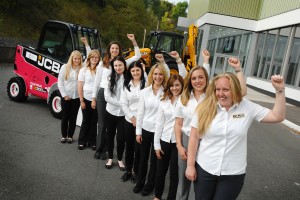 A record number of young women have started work at JCB as apprentices – challenging the myth that engineering is very much a man’s world.

Nine females have just completed the first week of their apprenticeships – almost double last year’s intake. They have been recruited as part of the company’s Young Talent initiative which attracted more than 1,000 applications for more than 100 new jobs for apprentices, graduates and undergraduates. A total of 59 of the new positions are for apprentices. Since its introduction three years ago, JCB’s Young Talent programme has seen almost 350 young people join the business. The latest recruitment drive comes after Lord Bamford underlined his commitment to “identifying and nurturing young talent” in his maiden speech in the House of Lords. This year also marks the 50th anniversary of the launch of JCB’s first ever apprenticeship programme – when every single recruit was a boy. Group HR Director Alan Thomson said, “We are delighted that more and more young women seem to be recognising that engineering and engineering companies represent an exciting opportunity for a rewarding and exciting career. “When JCB’s Young Talent programme first started in 2012, there was a solitary female amongst the apprentice intake. To have nine female apprentices this year is fantastic and we are hopeful it could mean that the tide is finally beginning to turn and that women don’t view engineering as very much a man’s world.”