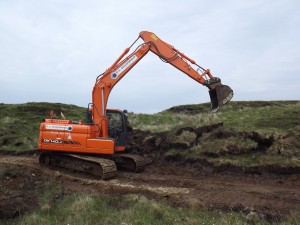 A new Doosan DX140LC-3 Stage IIIB compliant excavator purchased by Scottish contractor, D A MacDonald Contractors Ltd., is playing a key role in the company’s new hydropower project in Argyll, which will deliver vital electrical power to the national grid.

The14 tonne excavator was supplied by Scotia Plant Ltd and joins several other Doosan excavators recently purchased for the fleet, including DX140LC and DX225LC models.

Managing Director, Donald MacDonald, said, “They tick all the boxes, combining good durability with excellent operator comfort and fuel efficiency. There is a really good workstation for the operator in the cab and they make a very good value for money investment.”

The hydro scheme has involved building a dam across the Abhainn na Cuile River at Kintarbert, involving the use of over 300 tonne of concrete and connecting this to the power house via a 2.1 km 1200 mm diameter pipe. Part of the trench for the pipe was dug with a Doosan DX340LC excavator, also owned by D A MacDonald Contractors.  Water is transferred via the pipe to the power house where it operates a turbine to create power for the grid, after which the water is returned to the river.

When it arrived on site, the DX140LC-3 was first used to dig the one kilometre trench for the supply cable carrying electrical power from the power house to the national grid. The excavator is also being used for landscaping work around the power house.

Based at Lochgilphead in mid Argyll in Scotland, D A MacDonald Contractors was formed in 1988.  The company has great experience of overcoming the logistical difficulties of working in rural locations and so is well positioned to carry out any type of project throughout Scotland and beyond.