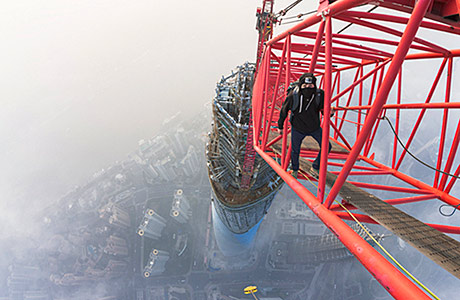 MEDIA coverage of ’urban explorers’ who photograph themselves on top of high buildings and structures is encouraging people to risk their lives on British building sites.

That’s the view of a leading plant hire firm, which says tower cranes and high-rise buildings under construction are seen as easy targets for copycat explorers whose sole aim is to take a selfie or shoot a YouTube video in a dangerous situation.
According to CraneHireUK.co.uk, the fad not only has the potential to end in death or serious injury, but there’s also added costs for the construction trade which has to beef up security in response.
“There’s no end of beautifully-photographed articles on the internet showing spectacular views from the tops of cranes and half-finished buildings,” said the firm’s Mark Hall. “And that’s inspiring copycats who fancy having a go themselves.”
The danger is increased by the fact many people fancying themselves as urban explorers don’t have the climbing skills that those featured on television documentaries have, and in some cases the decision to climb a tower crane in the dead of night is often made on the spur of the moment.
Mr Hall added, “Some of those collared by building site security guards are the worse for wear from alcohol. These people are genuinely dicing with death.”
CraneHireUK.co.uk say the number of people taking selfies and shooting videos from the top of building site tower cranes surged after spectacular photographs emerged last year of a group who climbed London’s Shard building while it was still under construction.
“While everybody in the construction industry rightly condemned these trespassers, the difference between these and Friday night have-a-go types is that they’re well organised and experienced climbers,” Mr Hall added.
Another news report on Russian climbers also provoked copycat trespasses on construction sites.
“The end result is that the construction trade has to ramp up security at major sites just to keep these lunatics away from the cranes,” said Mr Hall.
“It costs a small fortune in extra staff and surveillance equipment, but it’s got to be done. Building sites are not adventure playgrounds.”