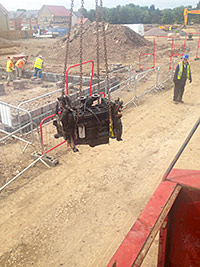 ANDY Black is fast becoming a huge presence in the Scottish plant industry – and not just because he stands 6ft 7in tall!

A former Apprentice of the Year, Andy spent two years working in Africa before returning to Scotland to found Relentless Plant, one of the fastest-growing on site plant repair and servicing firms in the country.
It’s an incredible success story for a young man who’s still only 25-years-old.
Andy left school at 16 and, against the wishes of his father, a parts manager with Marubeni-Komatsu, decided to enter the plant world.
Andy explained, “When I was a kid my dad would sometimes take me into his work at weekends. I was fascinated by the plant industry. I’ve always been mechanical and there are no bigger toys than diggers!
“My dad wanted me to be an electrician or a plumber but when he found out I’d applied to Caterpillar and was serious about this, he helped me get an apprenticeship at Marubeni-Komatsu.”
Andy enrolled on a four-year apprenticeship, during which time he learned all aspects of the business. His aptitude was recognised by the CMPE, who awarded him with the prize of Scottish Apprentice of the Year.

At the age of 20, Andy joined the Hawk Group where he worked in opencast mining in Ayrshire. One day they asked if he fancied working in an iron ore mine in Sierra Leone as a plant engineer, carrying out major repairs and covering breakdown.
“It was good money and I knew some of the boys who worked out there,“ Andy added. ”I did that for a year then the chance came to go to Guinea to be a plant manager. I was looking after machines including dump trucks and 40-tonne excavators.
“I enjoyed it but it was difficult as I got married at a young age and my wife and two young children were in Scotland and I was spending most of my time in Africa, only managing to get back home every few months. 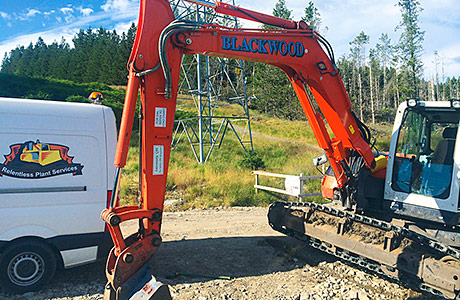 “One night before I was due to fly back to Guinea, my wife Deborah asked me not to go. I already had my return ticket but my youngest child was only 18-months-old and I was needed at home.”
That was in 2012. In October that year, Andy formed Relentless Plant. They focus primarily on repairs and service and clients include Advance Construction, Blackwood and Hawk.
Last year they became the Scottish agents for ECY Haulmark, supplying breakers and demolition attachments.
They have four service vehicles, four engineers and an apprentice. They also have a workshop in Wishaw.
Andy added, “I wasn’t put off starting a new business during the recession because there’s always work to be found. In our first month of trading, we got work with HE Services so we got off to a good start. Then Hawk gave us work, then Advance. 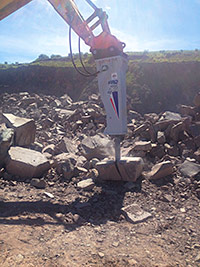 “We started to pick up a lot of work through word of mouth. Today most of our work is repeat business.
“If someone phones us at 10pm, someone will go out. It’s hard to find people who want to work long, hard hours but that’s what you have to do to succeed. It’s tough to stand out in this industry so we’ve had to be proactive. Some people sit and wait for work to come to them but we’re always approaching new companies. We’ve developed a good reputation.
“We’ve started to get a lot of work through the likes of Facebook. We’re always posting little snippets of what we do, like uploading photos whenever we sell a machine.
”This lets people know what we’re doing and helps get our name into the public domain. Firms can see that if something needs done, we’ll do it.
“Business is brilliant for us at the moment. We’re doing a lot of undercarriage overhauls and converting machines for the forestry industry.”
Andy says his age hasn’t been a hindrance in persuading companies to give them business – though he admits people are often surprised when they find out he’s only in his mid-20s. 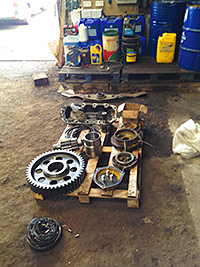 “The plant industry can be an old industry,” Andy added. “In my opinion there aren’t enough apprentices, and many of those who are in apprenticeships will drop out or leave to join other industries. We have an apprentice at Relentless and it’s my ambition to try every year to take one on. The four years I spent as an apprentice at Marubeni-Komatsu were absolutely crucial.
“I wouldn’t be here today without having met some of the people who helped me back then. Taking on apprentices gives you the chance to show someone how you expect things to be done and lets them see the standard you expect. I’d love to take on more skilled engineers and one of my biggest hopes for the future is to sell more breakers. We’ve just done a deal with Malcolm to sell them four large breakers and a concrete muncher. We’re growing all the time and I’m also hoping to have a stand at the next ScotPlant show.
“My advice to other young people interested in starting out on their own is ’go for it‘. As long as you watch yourself and listen to good advice, you’ll be fine.”