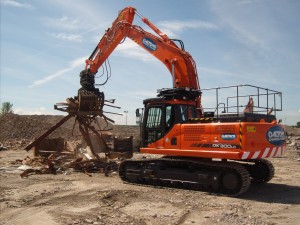 The machine has been supplied with a host of safety and demolition features, including a cab guard, heavy duty undercarriage, underguarding, side protection, additional hydraulic circuits, safety handrails, vandal guards and a warning beacon. The new excavator package also included a new Geith quick hitch and a new Doosan heavy duty bucket.

The first project for the new model was on a demolition contract at Dunfermline, which involved demolition of a steel frame building, which had previously seen life as a supermarket distribution centre and before that, as a whisky bottling plant. The existing buildings have been demolished by Daltons to make way for a new office and manufacturing facility for a leading oil industry company.

Daltons started the 12 week contract using theirolder DX300LC machine which was replaced two-thirds of the way through by the new model.

Tony Mill-Irving, Contracts Manager at Daltons, who was responsible for specifying the new excavator, working closely with David Nicholson, Sales Manager at Scotia Plant, said, “We purchased the new DX300LC-3 excavator, based on the performance of the Doosan DX300LC model it has replaced. Like the Doosan DL300 wheel loader in our fleet, we have been very happy with the DX300LC machine which we ran for 4-5 years – the feedback from our operators was very good, scoring highly on comfort and power to weight ratio.”

Daltons has been trading successfully for over 50 years, starting out in the scrap recycling business, where it is still a major player in the Scottish market, before forming Daltons Demolitions Limited in 1964. The company’s steady expansion has allowed depots to be opened in Leith, Airdrie and Linlithgow in addition to the headquarters at Gogarbank Iron & Steel Works on Station Road in Edinburgh.