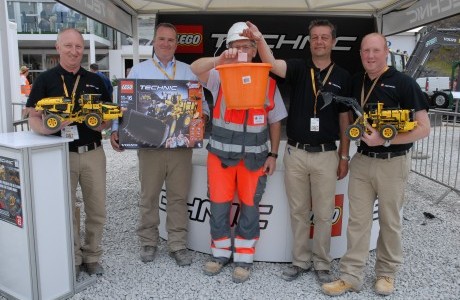 VOLVO Construction Equipment used Hillhead 2014 to showcase the imminent launch of the new Volvo Lego Technic model of an L350F / A25F and raised £2500 for The Lighthouse Club by raffling the only available model in Britain.

One of the latest remote controlled models to come out of the Lego Technic stable takes the shape of a Volvo L350F loading shovel which, as if by magic, can be converted into a 4 x4 model of the A25F articulated hauler. Volvo CE used Hillhead to showcase the two working models montaged in the bucket of a Volvo L60G on the stand

Besides the two working models on show the company was able to raffle a third complete Lego Technic model over the three day event with tickets being sold for £5 each and all proceeds going to The Lighthouse Club – the construction industry’s registered charity. In all £1140 was taken in ticket sales which was then matched and topped up by Volvo CE to a grand total of £2500.

The draw for the model was presided over by Jack Berridge, Director of Hillhead 2014 with the winning ticket drawn belonging to Mr Steven Ford who works for Miller UK Ltd.