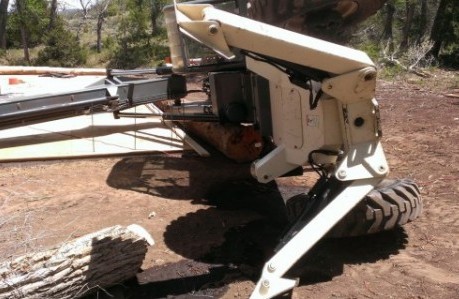 THE CPA has published additional guidance to help reduce the risks when working with telehandlers.

The new guidance on suspended loads on the ‘Safe Use of Telehandlers in Construction’ has been written to give clarification on good industry practice and is available to download.

The lifting of suspended loads with telehandlers and travelling with those loads is generally more hazardous than lifting unit loads on the forks of a telehandler.

In one case study highlighting inappropriate telehandler use, a 17m telehandler was lifting steel columns from a nearby lay-down area and positioning them for erection. Whilst manoeuvring with the boom section extended to give sufficient ground clearance, the telehandler tilted to one side causing the machine to overturn. The telehandler came to rest when the extended boom penetrated through an adjacent building roof. At the time of the incident, the vehicle was traversing an excessive slope.

The particular issues associated with using telehandlers to lift suspended loads are covered in the new four-page guidance. A more detailed explanation of the general safe use of telehandlers, can be found in the original document, ‘Safe Use of Telehandlers in Construction’, which was published last year.

In the new document, the section dealing with tyre replacement and tyre pressures has also been extended, to reflect the importance of tyres on the stability of a telehandler. More emphasis has been added to the guidance on use of seatbelts as an essential safeguard to protect the operator if the machine overturns.

Summaries of “Key Points” for Operators and for Supervisors have been developed based on the Guidance. It is intended that these can adopted and adapted by any company, as the basis for pocket cards, posters or any other relevant format.