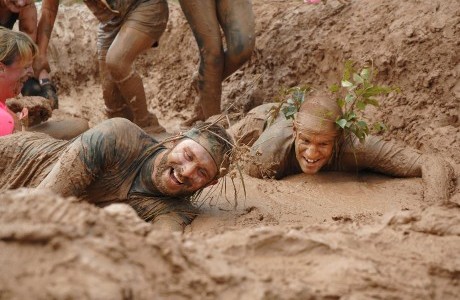 Participation in the event, which involves crawling, climbing and splashing around a gunge-filled course, was nearly treble what it was last year with competitors from all over the UK and beyond joining in the fun.

Daunting obstacles such as a 100ft rope climb and underground tunnels were combined with natural terrain – including woods, rivers, inclines and peat – for the five-mile course on land owned by JCB in Staffordshire.

A cheque was presented to NSPCC representatives by George Bamford, son of JCB chairman Lord Bamford.

George, who took part in the JCB Mud Run for the second year running, said, “What a fantastic event and what great camaraderie – the best I’ve ever seen. Everyone was helping one another to get over the obstacles and to get through the mud and water.

“I can’t believe so many people have turned out. – 2,700 is an incredible number. And I’m so proud of what we have been able to raise for the NSPCC. It’s a staggering total. Well done to everyone.”

First team across the line included Mark Dalkins, of Cheadle, Staffordshire, who notched up an incredible double. Two weeks earlier he was in Savannah, Georgia where he also won the JCB North America Mud Run.

The veteran roadrunner said, “It was a tough course and a bit longer than last year’s and there were more obstacles. It had been raining for 12 hours solid in the build-up so there was a lot more water around, which made going underfoot a real challenge.

“Having said that it was great fun to take part in and the fact I was in America two weeks earlier to do the JCB event there made it even more special.”

London 2012 Olympic Torchbearer Dave Allen – who works for JCB as a sales manager – was crowned the JCB Mud Run winner in the individual race with a time of 38 minutes and 53 seconds.