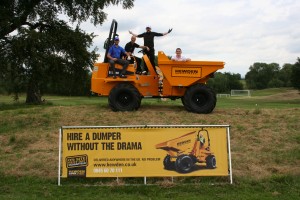 RORY Mcllroy may be lifting his Claret Jug after wining the British Open but he wasn’t the only one celebrating a golfing victory last weekend.

Plant hire experts Hewden raised a staggering £10,000 for worthy causes at a golf event at Mottram Hall in Cheshire.

Keen golfer and Hewden commercial director, Susan Shardlow, organised the successful fundraiser, which pitted the skills and prowess of Hewden employees, suppliers and stakeholders in a four-ball competition.

Hewden truck supplier Scania proved their handicap by winning the tournament. Scania has nominated Cannon Slade Charitable Trust in Bolton to receive £1,000 for school funds as part of their prize.

The other good cause to benefit was Arch, a charity which supports the victims of domestic violence and cancer research.

Susan Shardlow said, “We were delighted with the enthusiasm of our clients and employees who have given generously and we have had some great support from our suppliers. Everyone had a good day and we have raised funds for worthy causes to boot.

“One of the highlights was the on course competition of chipping a golf ball into a 9tonne dumper, which was properly disabled and filled with sand. The challenge proved a real winner raising over £650, and thankfully the dumper remained intact.”