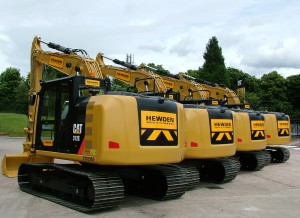 HEWDEN has confirmed another deal with Finning to expand its core fleet with an additional investment of £3 million, taking the total value of purchases in the last 12 months to £35 million.

The latest order will see Finning deliver a further 26 Cat hydraulic excavators to the national plant hirer. The purchase consists of 21 Cat 320EL’s and five 312E’s. This adds to the fleet of 109 excavators bought earlier in the year and 463 C series telehandlers purchased in late 2013. The deal takes the total number of new Caterpillar core fleet products secured in the last 12 months to 598 units.

Hewden Director Mark Hogg said, “Our core fleet next day delivery guarantee has been a real success, with the 109 excavators previously purchased from Finning proving to be very popular. This latest purchase is testament to the success of our ongoing relationship with Finning and shows just how important the combination of state-of-the-art Cat equipment and service support is in the competitive market of plant hire.”

Andy Davies, Finning Strategic Plant Hire Account Manager, said, “Reaching the £35M landmark with Hewden has been a real achievement. With nearly 600 new units on the core fleet, Caterpillar machines are now a significant part of the Hewden customer offering. This in turn exposes more people to the high performance of both our E series excavators and C series telehandlers. Equally with Hewden continuing to opt for extended warrantees and service support, core fleet Caterpillar customers will be safe in the knowledge that no matter where they operate, they will be supported by Finning.