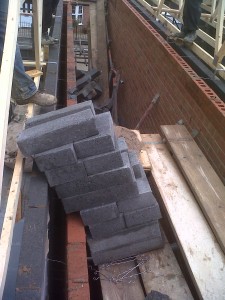 A house builder and a scaffolding firm have been fined after two bricklayers were hurt falling from an unsafe scaffold.

A court heard the two men were working for Persimmon Homes Ltd on a development site in Bunkers Hill, Lincoln, when the incident happened in April 2012.

They were about to start work on a scaffold platform six metres from the ground, which had been loaded with materials. Just as they started work, the scaffold collapsed and they fell around two metres on to a platform below.

One, a 62-year-old from Rossington, South Yorkshire, broke his left foot. He was unable to work for nine weeks. The second, 29, also of Rossington, bruised his neck and twisted his knee. He missed one day of work.

A Health and Safety Executive (HSE) investigation found The Cathedral Scaffold Company Ltd had constructed the scaffold to bridge a narrow gap between the gable ends of two neighbouring properties. However, the company did not build it to a recognised design, which would have incorporated standards to transfer loads to the ground. They wrongly believed they could not fit them and a four board-wide working platform, as required by Persimmon, into the gap.

Instead they used a non-standard configuration of scaffolding but failed to carry out strength and stability calculations to ensure it was fit for purpose. The company issued a Handing Over certificate to Persimmon, setting out restrictions on the use of the scaffold. This identified it as a general purpose scaffold capable of supporting a specified distributed weight load, but because no strength or stability calculations were undertaken by either defendant, this distributed load could not be guaranteed.

Persimmon subsequently overloaded the platform, causing it to collapse.

HSE found the weight of just one pack of dry blocks distributed evenly over the platform would have taken it over the load limit – even without the men, tools or mortar on the platform. It was likely that the actual loading could have increased the danger as the blocks were all stacked towards one side of the platform.

Persimmon Homes Ltd pleaded guilty to breaching Regulation 8(b)(i) of the Work at Height Regulations 2005 and was yesterday fined £8,000 and ordered to pay £10,426 costs.

The Cathedral Scaffold Company Ltd, of Lincoln, pleaded guilty to breaching Regulation 8(b)(ii) of the same Regulations and was fined £4,000 with costs of £5,500.

HSE inspector Linda-Jane Rigby said, “Unless a scaffold is a basic configuration described in recognised guidance it should be designed by calculation, by a competent person, to ensure it will have adequate strength and suitability. The design information should describe the sequence and methods to be adopted when erecting, dismantling and altering the scaffold.”